13 Audi Cars In India That Everyone Is Obsessing About 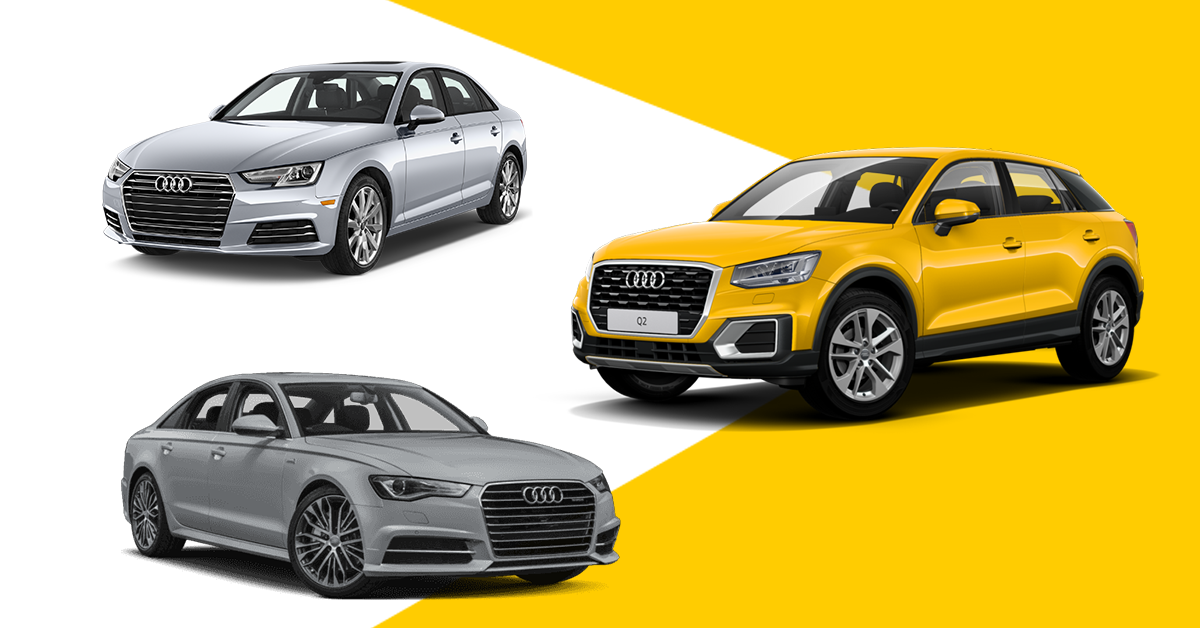 Audi is a German automobile manufacturer that produces luxury cars and premium SUVs. It was founded in 1909 at its headquarters in Ingolstadt. Audi cars have a special status as a luxury brand in India.

Audi was introduced in India in 2007, as a division of the Volkswagen group India and has its headquarters in Mumbai. The product lines for Audi in India are divided into two types of models, Standard line and Sports line.

In the standard line of models, we have the A3, A4, A5, Q2, Q5 and Q7. In the sports line of production models, the line-up includes the RS7 Sportback, S5 Sportback and the RSQ8.

Audi also has electric cars in its models list such as the e-tron, e-tron Sportback and e-tron GT. The e-tron marks Audi’s introduction into the electric world and it will take on the likes of the Jaguar I-Pace and the Mercedes Benz EQC. In terms of safety the e-tron has received a 5-star rating from the Euro NCAP crash test.

Audi car starting price for the Q2 is Rs.35 Lakhs and the most expensive model is the RS7 Sportback which starts at a price of Rs.2.23 Crore. Audi has built a wide dealership network around the country and spans across 11 states and 2 union territories. In India, Audi makes use of the manufacturing facilities established by Skoda Auto India Private Limited in Maharashtra for local assembly of the Audi A4, A6, Q5 and Q7 models.

Let's Have a Look at the Model Line-up for Audi Cars in India. 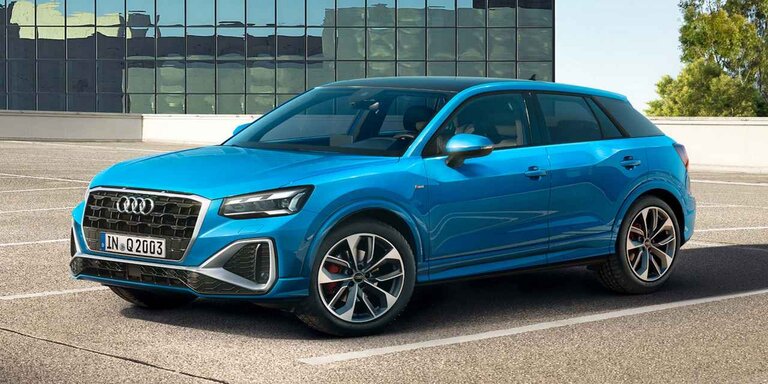 The Q2 is known as a high riding European mini-SUV or rather a hot hatch with that extra bit of ground clearance. It makes sense for its offerings which is a hot hatch that is fun to drive, with a potent powertrain and Quattro four-wheel drive system. Features are not that numerous, but the asking price is justifiable because it has a better drivetrain than most compact crossovers.

Under the hood is a 2.0 litre TFSI petrol engine (187 bhp / 320 Nm) that gets a 7-speed automatic transmission that powers all four wheels via the Quattro all-wheel drive system. 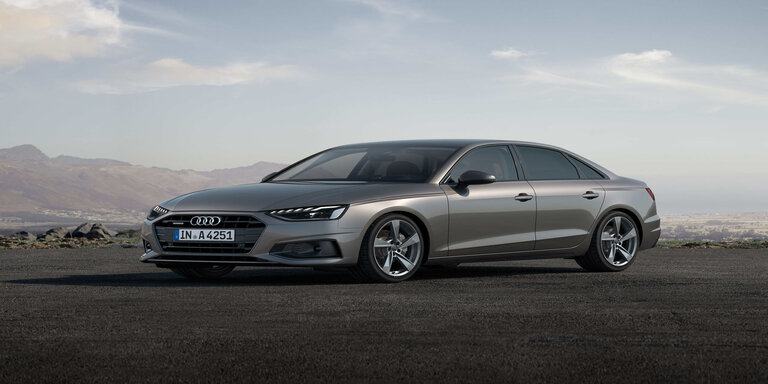 The A4 got a facelift this year, but it still looks stunning compared to its competitors, although styling is a tad bit subtle now. Behind the wheel, you get a real driver’s car that is willing to perform on all levels.

Compared to the BMW 3 series, you may not call the A4 a driver’s car and the Mercedes Benz C Class feels more luxurious and charming, but the A4 is definitely sportier than the two and adds a touch of elegance to the mix. 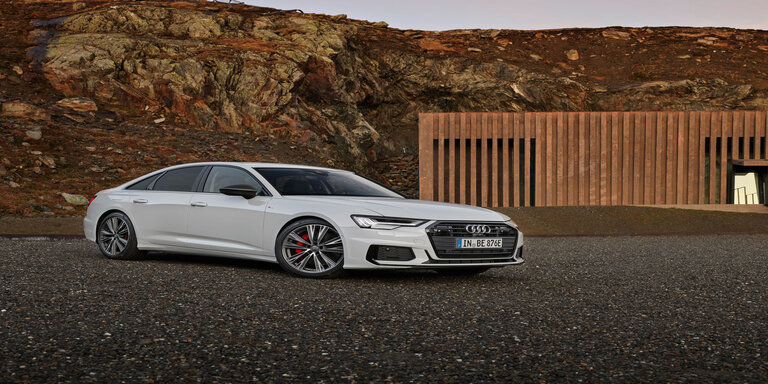 The Audi A6 lacks the flair of the BMW 5 series or the Mercedes Benz E Class, and has gotten some cosmetic changes to appeal to a wider audience. The limited powertrain options may make buyers think twice, but they are smooth and refined.

The A6 is slightly bigger than the outgoing model, and comes packed with new age tech features that look really good given the fact that the A6 is competitively priced starting from Rs. 54 lakhs which is more affordable than its rivals. 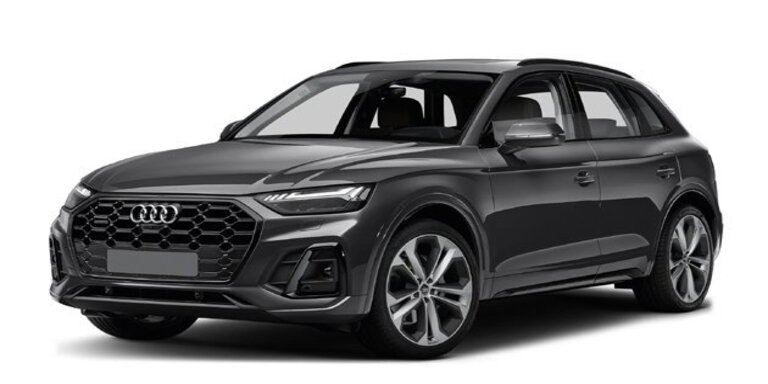 The Q5 is a modern and updated midsize premium SUV that goes up against the BMW X5 and the Volvo XC60, although purists do believe it should have been better than this. Ride comfort and dynamics are excellent although its rivals have been doing better and upping their game.

This facelifted Audi Q5 is powered by a 2.0 litre, four-cylinder petrol unit (245 bhp / 370 Nm) that is paired to a 7-speed automatic transmission, powering all four wheels via the Quattro all wheel drivetrain.

The front has a single-frame grille with the signature Audi look, along with LED headlights, new front and rear bumpers, LED tail lights and well-designed 19-inch alloy wheels. 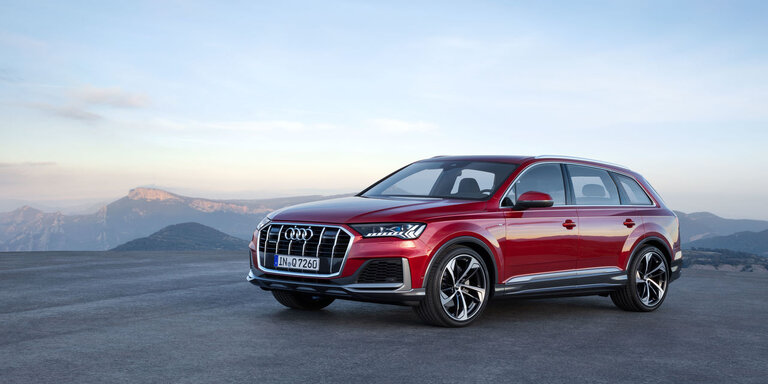 The Q7 is well known not only for its large dimensions, roomy cabin space but also for its good performance on the road and off the beaten track. This new generation Q7 gets updated styling features, and an appealing design.

The only downside is that it comes with a petrol engine and there is no diesel powerplant on offer. The engine is a 3.0 litre V6, that is coupled with a 48-volt mild-hybrid system producing a maximum power output of 335 bhp (500 Nm of torque). The engine is mated to an 8-speed automatic transmission that powers all four-wheels through the Quattro all-wheel drive system.

Despite this frugal diesel unit, the SUV is comfortable and is on par with its rivals in terms of performance and drivability. 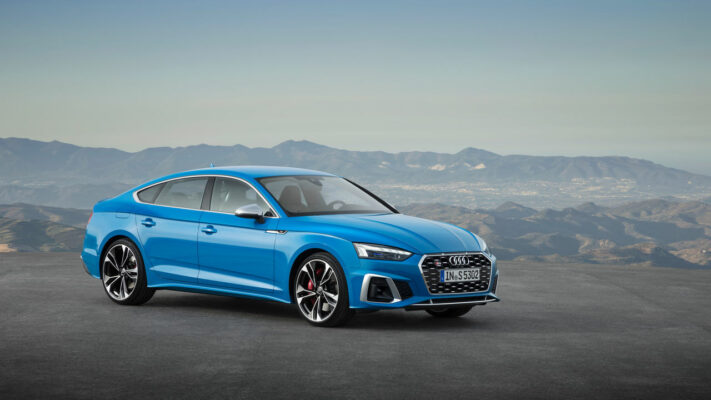 The S5 Sportback has a phenomenal engine and transmission with excellent road manners and great comfort. It is all you need in real driving conditions and has enough punch to rule the roads. The S5 Sportback gets the Audi trademark Quattro all-wheel drive system, mated to a quick shifting 8-speed transmission.

The S5 is packed with loads of comfort and tech, exactly what you would expect from this segment. Being a fastback, it gets more than average boot space which brings a lot of versatility and convenience.

The engine is a turbo-petrol, 3.0 litre that is tuned to produce 349 bhp and 500 Nm. Not surprising is the performance you get from this powerplant, with acceleration time 0-100 km/h in 4.5 seconds. 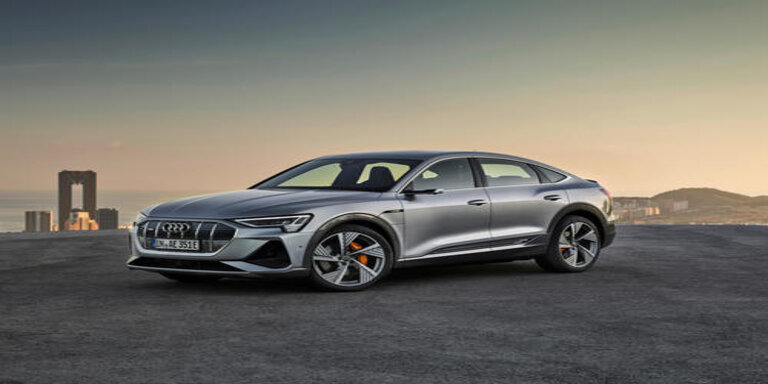 The models have a range of 359 km – 484 km and come loaded with features such as a panoramic sunroof, virtual cockpit, four zone climate control, heads up display, wireless charging and a 360-degree camera with ambient lighting for the interiors. 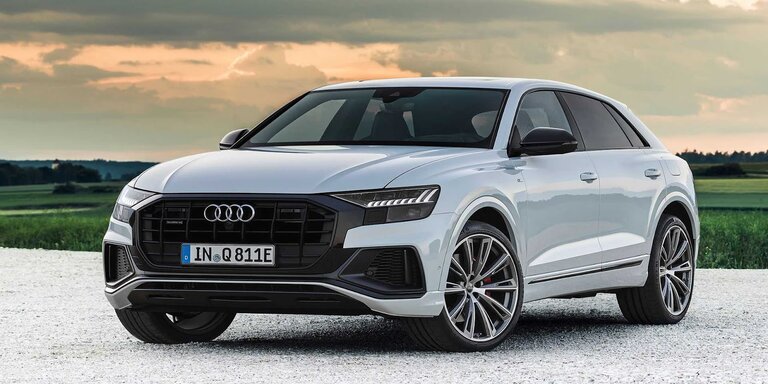 The Q8 stands out as a premium, full size SUV that drives perfectly, and literally has no rivals in this segment. The Audi Q8 is a good option although it comes at a steep price. It is surely a comfortable cabin to be seated in, and comes with immense road presence, a beautiful engine and lots of practicality due to the rear seats that can be folded down to provide a usable boot.

This flagship SUV gets a 3.0 litre, V6 petrol engine producing 335 bhp of maximum power and 500 Nm of torque. The engine gets an 8-speed automatic transmission that powers all four wheels with the trademark Quattro drivetrain system. 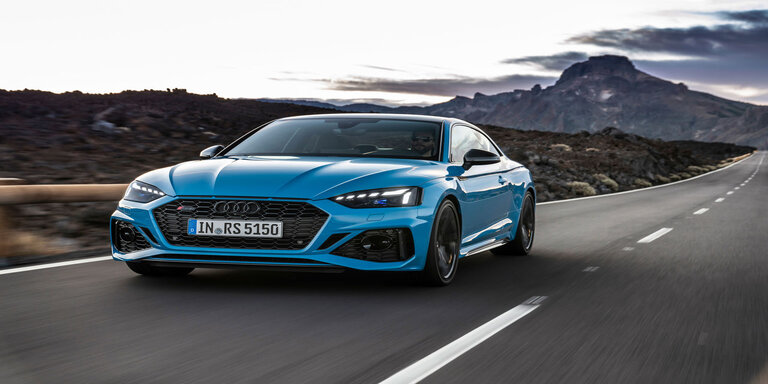 The RS5 gets mind boggling performance and is effortlessly usable as a daily driver. It is also practical because it gets 4 doors and a luxurious cabin. However, it is not as exciting as its rear-wheel-drive rivals, and it makes more sense to purchase the credible Audi S5 Sportback. The ride is also stiff and more geared towards the sport side.

The RS5 coupe is centred around being an intoxicating drive for four passengers (because it gets four doors). Under the hood lies a sublime 2.9 litre, twin-turbo V6 petrol engine that produces a maximum power output of 444 bhp and peak torque of 600 Nm. A top speed of 250 km/h is attainable with a 0-100 km/h acceleration time of 3.9 seconds. There is also the trademark Quattro all wheel drive system and a sports suspension package. 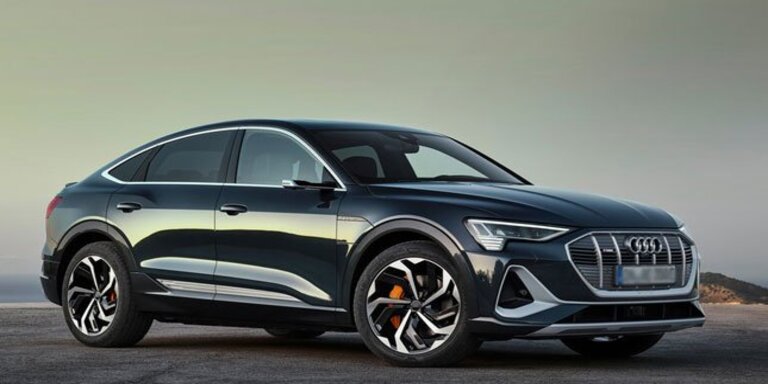 Powering the e-tron Sportback is a 95-kWh battery that produces a whopping 402 bhp of power and 664 Nm of torque. The estimated range for this motor is 359-484 km on a full charge. The charging port can be found on the front fender and there are multiple charging options such as a home charger or a DC fast charger that takes only half an hour to recharge the battery to full capacity.

The low-slung Audi e-tron Sportback costs 2 lakhs over the standard e-tron but what you get is more like a sports car albeit in an electric guise. Performance is instantaneous and you get a comfortable ride from the coupe-like stance.

However, the lazy handling could be better and so could the charging times on a regular charger which would take 8 and a half hours for a full charge. 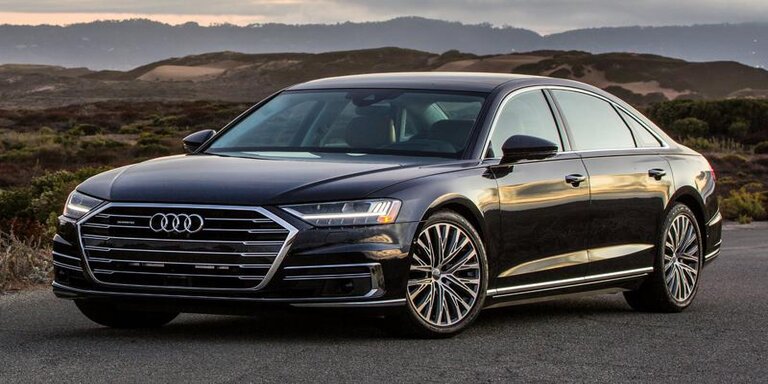 The supreme Audi A8L is the flagship limousine from the German automaker with an elegant design and extra-large proportions. The interiors are impressively luxurious and it comes loaded with all the bells and whistles, with top notch tech features and comfortable rear seats.

Audi could have done better by offering more engine options, and a diesel unit is surely missed. However, the petrol engine offers explosive performance. The Audi A8L stands for the long wheelbase version which was launched at the start of 2022 with an all-new design language, luxurious features, and a cockpit that is completely touchscreen controlled. 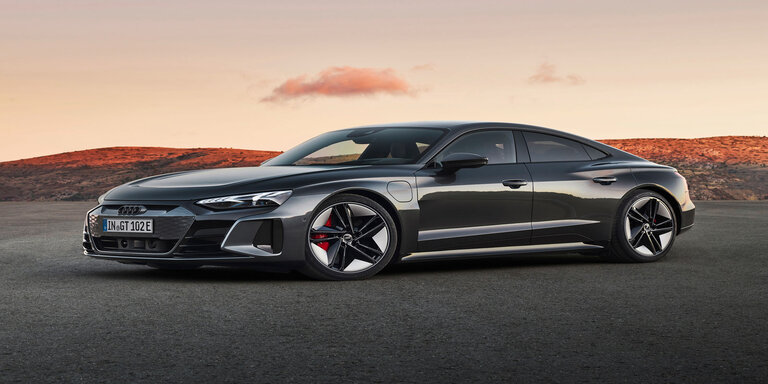 This all-electric sports car is based on the underpinnings of VWs J1 platform which includes the Porsche Taycan. It is a four door GT sports car that has a driving experience unlike any other electric car.

Blistering performance comes together with composed handling and sharp designs that blend well. The price is steep at Rs.1.66 Crore and range of 481 kms could have been better for a 84 kWh lithium ion battery pack, but considering it produces 469 bhp (590 bhp in the RS version) this kind of range seems adequate.

It features a virtual cockpit, which is a fully digital instrument console, a 12.3-inch touchscreen infotainment system and a park assist function as some of its notable features. 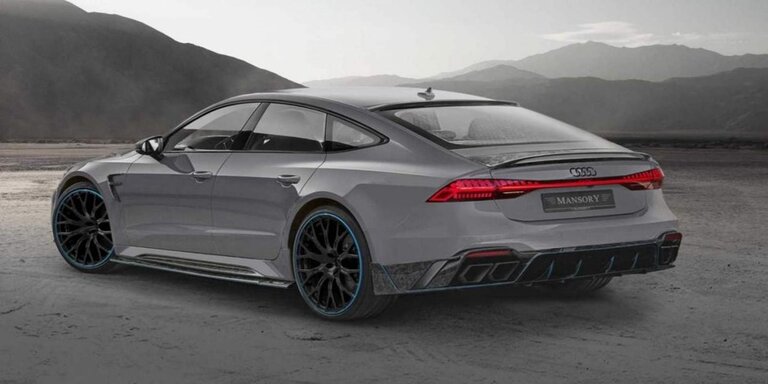 Arguably, one of the fastest four door sedans on the planet, the Audi RS7 Sportback has a massive 600 bhp and has enough grunt in its engine to put many lightweight sports cars to shame.

Even at standstill, the sports styling looks striking and ready to race while the interiors match well with the cars racing pedigree. The Quattro all wheel drive system offers plenty of grip, but the extra weight makes it a bit heavy round corners.

It has a stunning coupe design but a thirsty engine. The power plant is a twin turbo, petrol V-8 that has 600 bhp of maximum power and 800 Nm of torque. Mated to an 8-speed automatic transmission, this sports car can accelerate from 0-100 km/h in 3.6 seconds.

Audi cars in India, just like across the world, are well known for their modern technology, exceptional exterior designs, and luxurious interiors. It offers a fleet of different models with Audi cars priced all the way from 40 lakhs to 2 Crores.

The German brand has done an excellent job of strengthening its brand name in the luxury car, premium SUV and sports car segment. And with the release of the e-tron they have entered the electric car market as well, and seem poised to take on the likes of BMW and Mercedes Benz which are some of its biggest rivals.

The SUV range consisting of the Q2, Q5, Q7 and Q8 are immensely popular in the Indian market, and Audi has made this segment a priority for them as they move forward in the country. Audi is planning to launch new cars in the market such as the Audi A3 2023, Audi A8L 2022, and the Audi Q3 2022.

4X4 Cars In India – All Roads Or No Roads

Which is the Better Compact Suv: Toyota Urban Cruiser Vs Mahindra XUV 300