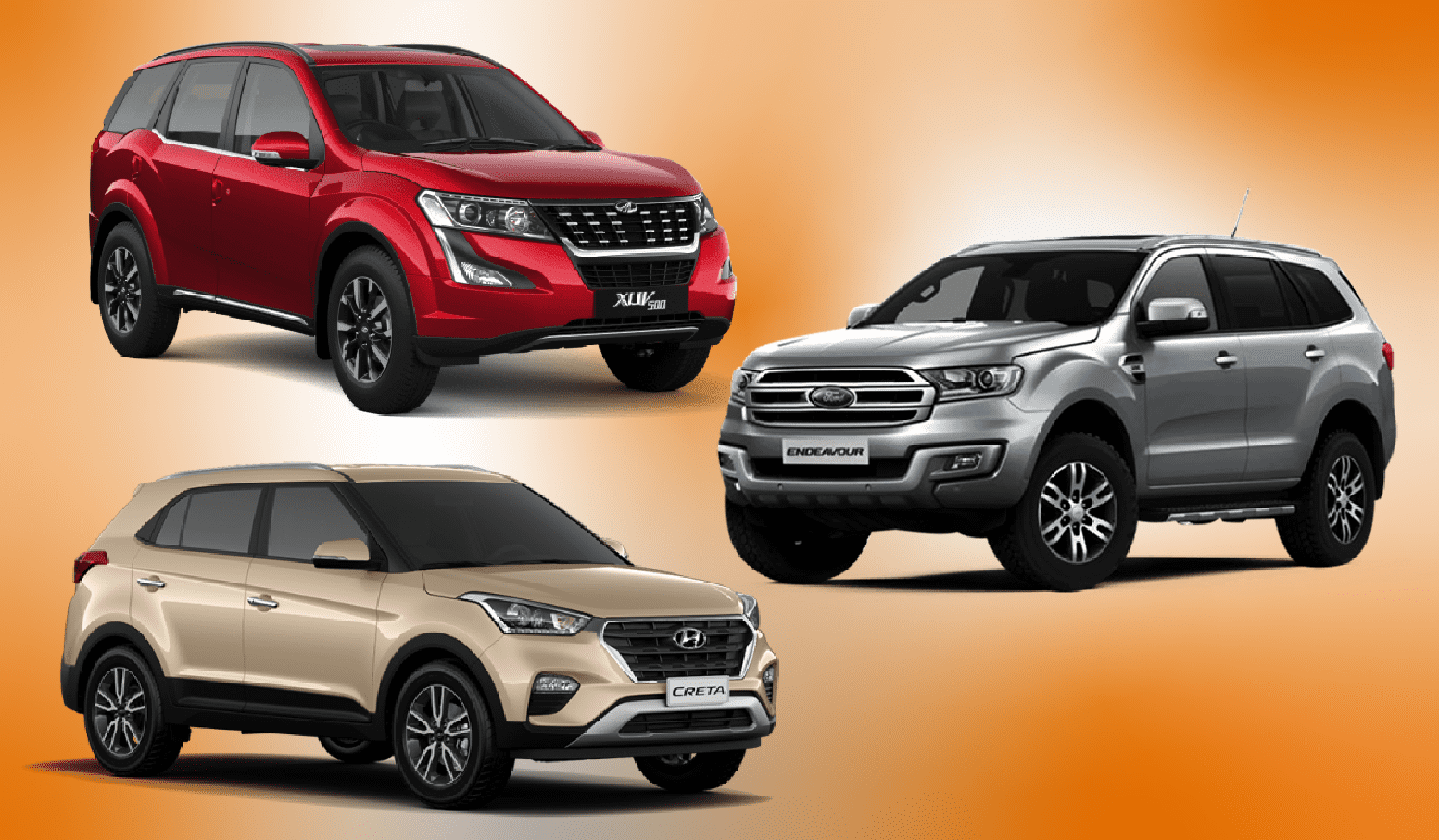 With every manufacturer getting on the SUV bandwagon, we are seeing more SUVs on our roads every day. It only makes sense that some car enthusiasts turn to modifying SUVs to deliver high performance, or at least look stunning. Modified SUVs take the vehicle to the next level for automotive aficionados and there are a host of aftermarket accessories and tuners to do just that.

For those who dream of having an SUV that stands out from the crowd, we have put together a list of the top modified SUVs in India. Those that took stock and boring to customised and gorgeous. Machines that pack an extra punch and offer wild performance.

SUVs are king on and off the road, and they offer a fine balance between the two terrains. Modifications can utilise these qualities to make them even more suited to their environment. Some SUVs sport large suspensions that can take the SUV on roads it couldn’t imagine driving on stock springs. Other SUVs offer a wide body kit for extra traction while hugging the corners.

India loves SUVs. The state of our roads warrants a car with high ground clearance and good suspension. Speed bumps are never standard size, and cars that are low to the ground always end up scraping their underside on them. It’s no surprise that SUVs reign supreme here.

Take a look at the coolest modified SUVs in India and decide which is the best. You can even get some great ideas if you are planning to modify your own SUV.

With the number of Mahindra XUV500s around, it was inevitable that a modifier got his hands on one of these. The exterior of the XUV500 can be overly modified, and some practical customisations can be done to it.

This is an SUV that you could take on a long tour, and still have enough space for passengers and their luggage. You can add a toughened-up bumper with extra LED lights for increased visibility in fog or at night.

Side rails below the doors help passengers step into the vehicle, which sits high up due to oversized wheels. Plastic cladding all over the wheel arches and doors will make the XUV 500 look much bigger than it actually is.

The SUV can be given a custom paint job and an Indian flag on its large bumpers, to show the patriotic nature of the modifier. On top of the vehicle you can add a large roof rack with LED lights to light up the road in front.

The body cladding is usually made of smooth plastic that is not as heavy as it looks, thereby not affecting the overall weight.

A cargo box can be installed at the rear of the vehicle for extra luggage carrying capability. The front grille should be left more or less untouched to preserve the identity of the Mahindra XUV 500.

SUV enthusiasts will just love the way this vehicle looks and it gives designers some good ideas for customisation options on similar vehicles.

The Mahindra Thar has been selling extremely well thanks to its go anywhere attitude, robustness and strong engine that makes it very reliable.

There are a number of official modifications to the Mahindra Thar in addition to the vast range of aftermarket modifications. Customisation garages simply love the Thar for this reason.

The Mahindra Thar comes in two versions, the open top and the hard top. Both options look great.

Big tyres can be fitted on the Thar such as 37 inches Maxxis with specially modified fenders to accommodate those large tyres. The hood can be modified to feature a winch. Customizations can include a roll cage, a high lift jack, modified wing mirrors and the exhaust system can be custom made for this vehicle.

In order to rule the offroad environment, the Thar can be equipped with a locking differential and a customised suspension system making it an extreme off-roading machine.

The interiors can be modified as well, with the addition of a touchscreen infotainment system and a customised steering wheel. Coloured accents in the interior would give the Thar a premium feel when driving around.

The Ford can be given a new hood scoop, and a fully adjustable suspension setup for different road conditions.

The Endeavour’s front grille can easily be swapped with the Ford Raptor’s front end, and rims can be replaced with off-road spec tyres.

The Vitara Brezza has been the best-selling SUV on the market for some time now, and modifiers love to get their hands on one to customise. The Brezza can be modified to look exactly like a Range Rover Evoque.

The total cost of modifications for the Brezza should be around 6 lakhs, with only exterior modifications. You don’t have  to make changes to the engine, frame, and interiors. Even though the modifications would be completely cosmetic, the Brezza would look stunning.

The stock Brezza front grille can easily be replaced with a Range Rover Evoque inspired front grille. The headlights can be lifted off straight from the Evoque and a series of Daytime Running LEDS can be added to the bumper to mimic the Evoque. One can customise a silver skid plate under the front bumper which is similar to the Range Rover’s.

The straight fenders can be customised to more rounded edged fenders. While the side profile is hardly changed and can be recognized as a Brezza. The rear is easily modified to look like the Evoque, especially the tail lights, flat boot lid and a rear spoiler.

The Brezza can have its roof and side pillars painted black, with the rear having a skid plate with openings for dual exhausts. The modifications can be limited only to the exterior with only mild changes added to the interiors.

The engine can stay the same. It is a 1.3 litre diesel unit, with 90 bhp of maximum power and 200 Nm of maximum torque. The engine comes with a 5-speed manual transmission.

The Mahindra Scorpio is a very popular SUV and many modified examples can be seen on our roads. Mahindra officially customises the Scorpio and the quality shows from every angle.

The SUV can get plastic cladding all round the exterior, making the Scorpio look muscular and ready to go off-road. The modification package is available on the 4-wheel drive and the 2-wheel drive versions of the Scorpio.

The 4-wheel drive version is the more able of the two, can be run on rough roads and can be driven to explore unknown terrain that you wouldn’t be able to reach in a normal SUV.

This is just not an exterior job, because Mahindra offers an upgraded suspension package, bigger tyres suited to off road environments and big bumpers. Advanced springs and dampers with a fully adjustable suspension that sits on Maxxis tyres provide exceptional grip in mud and sand. It also can get a cool set of black alloys that are suited for off road tyres.

This vehicle is strictly a two-seater with no space for any other occupants. It can feature a covered deck at the rear that can be used to carry off road essentials like a jack and spare tyres. The wheel fenders can have a thick plastic cladding with integrated indicators. The material is such that it will prevent the body paint from getting scratched.

The front bumper can be customised to have a high approach angle which helps on steep inclinations that the vehicle may have to traverse. There is also a snorkel that becomes essential when wading through deep water. For enhanced night time vision, the stock headlights can be replaced with LED units and the bumpers get integrated fog lamps.

There is a spare tyre fixed to the rear end of the vehicle which has some plastic cladding to make it look quite stylish. It can get faux exhaust pipes which total 4 in number. This pick up is ready to hit the tracks whenever you decide to take it off road.

The Maruti Gypsy’s traditional look can be totally reimagined to look like an off road king. Starting from the front, the grille can be modified into a mesh like design, and the stock headlights can get four LEDs surrounding them. LEDs can be mounted on the roof as well for excellent vision at night time.

Bumpers that are thinner than the stock versions can have specially designed indicators on them. A very large skid plate can be installed just below the front bumper which will come in handy while driving on rough roads.

Vehicles based on the soft top version of the Gypsy can have a specially made canopy with a small rear window. The Gypsy is a two-seater and has a large loading bay at the back. Wheel fenders can be extended to accommodate larger tyres and a neat silver footrail can help the driver and passenger get into the vehicle.

The rear bumper can get LED lights with a skid plate added just below it. The rear end of the Gypsy is dominated by the massive spare tyre. Stock rims can be replaced by special black off road rims with Maxxis tyres for improved grip on rough terrain.

With the interior, one can install special bucket seats to keep the driver and passenger safe while the car is bumping around. The engine and transmission can remain the same, a 1.3 litre, 4-cylinder petrol unit mated to a 5-speed manual gearbox. The four-wheel drive mechanism features low and high ratios to get the Gypsy out of the trickiest spots. The engine is good for 80 bhp of maximum power and 103 Nm of peak torque. Suspension is extremely durable with leaf springs doing duty on the rear axle.

If you liked this, then check out upcoming maruti suzuki suvs in India.

Another big seller in the SUV segment, the Hyundai Creta has had a lot of interest because of its stylish looks, value for money, features and refined engine. The Hyundai Creta can have a special body kit added that makes the SUV even more desirable than the stock version.

The total cost of these kinds of kits range from Rs.72,000 to 1 lakh. They come with special front bumpers, a new grill, side skirts and a redesigned rear end.

The front bumper gives the SUV a performance inspired look, with air vents and LEDs. The all-black grille can add to the sporty theme in front, while the headlights can remain stock. The rear of the SUV can also look very sporty with a spoiler and integrated LEDs, with a redesigned bumper.

Mechanicals can remain the same so that the owner can drive the vehicle with ease, making it perfect for everyday use. The suspension doesn’t have to be lowered, yet it looks that way because of the lower bumpers and side skirts.

There are 3 different engine options for the Creta, a 1.4 litre petrol, a 1.6 litre petrol and a 1.6 litre diesel. The diesel engine is good for drivers looking for power and mileage, while the petrol versions are suited to city driving.

Exotic cars and SUVs in India attract a very high import tax and end up being too expensive for those who want to buy such vehicles. Enthusiasts are now turning to modifiers to make their budget SUVs look like their more expensive counterparts.

It's not just the exteriors that are being customised, some modifiers also upgrade the engine, suspension and interiors, as well as mechanical components.

There are many SUVs that look spectacular right from the showroom, yet customizers will give the vehicle an extra dimension in terms of style, design, practicality and convenience. In the past, a custom job would include some stickers and decals, but today it means a total transformation of the vehicle.

How to Jack Up a Car step by step