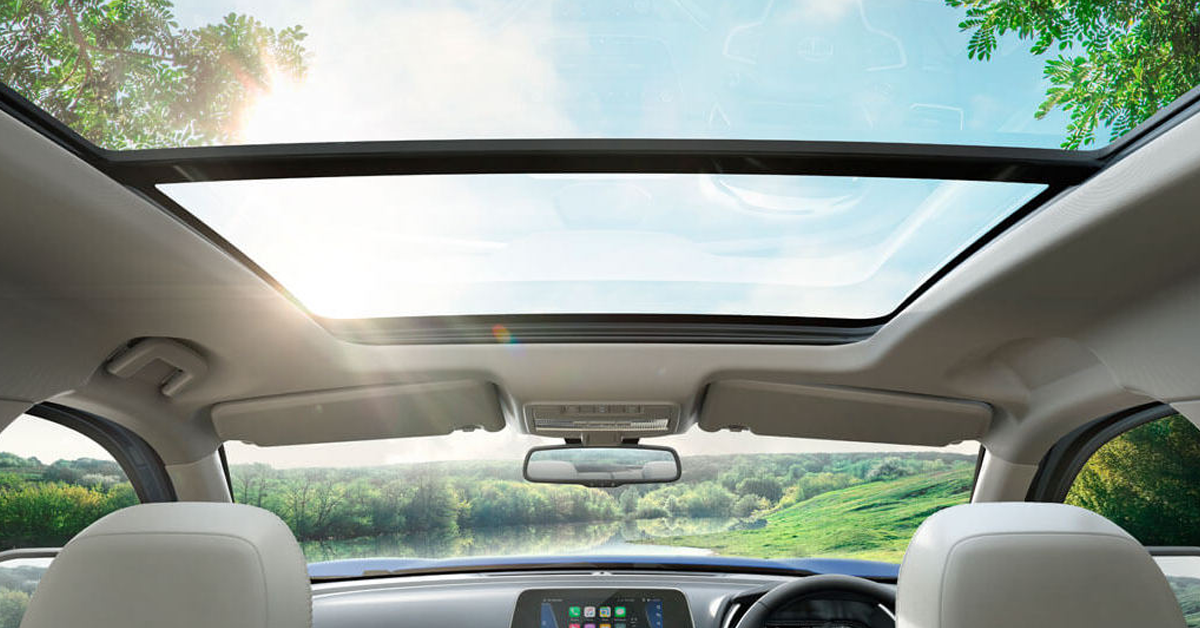 A sunroof is kind of a premium feature that is limited to top models & expensive cars. But you can get it on a budget too. While the summer is kicking in hard, we gotta keep the interior cabin cool. Too much air-conditioning is not healthy either, so you gotta let some of the cool monsoon breezes inside with a sunroof.

There are two kinds of a sunroof. A regular & a bigger panoramic sunroof. While we can find the regular one on the cars mentioned below, the panoramic one is pricier. It can be found on more premium cars such as Tata Safari & harrier, MG Hector & the biggest in the segment, the Mahindra XUV700.

A sunroof adds a little bit of luxury for your  car and gives it a airy feel in the cabin. During summer, the sunroof can be left open and the breeze can lift your senses. While during the monsoon, you can watch the raindrops falling on the glass and feel one with nature.

It is usually the higher trim variants that get a sunroof for that added level of style and luxury, however there are some affordable cars that feature sunroofs as standard.

Here is a List of the Top 7 Sunroof Cars in India.

The first car on our list is the Tata Nexon, it has been the top-performing product for Tata. Nexon & Punch have a major contribution towards increasing the sales numbers. The higher top-end variants of the Nexon come with an electric sunroof. It has both IC engine & EV versions with an additional long-range version Nexon EV MAX.

It is available with the following powertrains:

Nexon gets features such as 7-inch touchscreen infotainment system with Android Auto and Apple CarPlay, rain-sensing wipers, automatic climate control, rear ac vents, cruise control & a digital instrument cluster, air purifier, ventilated front seats. It also gets safety features such as dual front airbags, ABS, EBD, and ESC with a 5-star NCAP rating. It has a price range from ₹7.55-13.90 lakhs for IC engine and  14.79-19.24 lakhs for the EV.

This is the most recently updated car on the list, which got an electric sunroof with the update launched in late June 2022. This is one of the best products from the manufacturer, which is a complete package on a budget. It gets a revamped design with a slimmer front and stands on new alloy wheels.

Vitara Brezza is powered by a 1.5-litre petrol engine making 103hp & 137Nm torque with improved fuel efficiency. It comes with new features such as a 9-inch smartplay touchscreen infotainment system with Alexa connectivity, and a 360-degree camera. It also gets paddle shifters with the new 6-speed automatic gearbox. It has a price range from ₹7.99-13.96 lakhs ex-showroom.

This is one of the most loved sedans in India that was first launched in 2008. Now a hybrid eHEV version of the same has also been launched in the market. Honda offers an impressive package with its reliability and both petrol & diesel VTEC engines with good power & fuel efficiency with premium features such as a sunroof.

It has been ruling the sedan segment, and some might call it the king of sedans. We do expect it to face some competition from new products such as Slavia & Virtus. It offers both 4th & 5th generation with a 1.5-litre petrol & diesel engines making 121hp & 145Nm torque and 100hp & 200Nm torque respectively. It comes with a standard 6-speed manual transmission and an optional 7-speed CVT for the petrol engine only. Honda City has a price range from ₹11.46-15.41 lakhs ex-showroom.

Sonet & Seltos have been performing well for the Korean manufacturer. Sonet comes with multiple engine options, and it is well equipped with convenience and premium features such as a sunroof. It has the same powertrain options as its sibling venue and offers s decent package.

It is offered with the following engine options:

Sonet has features such as UVO car connected tech, air purifier,  10.25-inch touchscreen infotainment system with Android Auto and Apple CarPlay. It has a price range from ₹7.15-13.69 lakhs ex-showroom. You can get a sunroof for under ₹15 lakhs with this SUV.

The i20 is one of the premium hatchbacks in the segment, and it is equipped with an electric sunroof, unlike the competitors. It offers the same engine options as the Kia Sonet mentioned above. It also comes with a sportier performance variant known as the i20 N-Line.

It is equipped with features such as a 10.25-inch touchscreen infotainment system with Apple CarPlay and Android Auto, LED  headlights, Bluelink car connect from Hyundai and a price range from ₹7.03-11.54 lakhs ex-showroom. You can get a sunroof for under ₹15 lakhs with this car.

The Mahindra XUV300 is one of the underrated compact SUVs in the segment. People might argue that it is overpriced and has a small boot space. But it is a good product with a decent package that is slightly pricey.

It comes with two engine options. A 1.2-litre turbocharged petrol engine is making 110hp & 200Nm torque, and a 1.5-litre diesel engine churning out 117Nm & 300Nm torque. It has convenient features such as cruise control, an electric sunroof, connected car tech & rain-sensing wipers. It has a price range from ₹8.41-14.07 lakhs ex-showroom.

This is the latest candidate in the premium sedan segment. It has sleek cuts and an aggressive design along with the excellent engine & driving dynamics from Volkswagen. It also gets features such as cylinder deactivation technology that automatically shuts down 2 cylinders while cruising to enhance fuel efficiency.

Virtus also gets a GT version with cosmetic upgrades. It shares a similar powertrain as Taigun with two petrol TSI engines. The 1.0-litre TSI makes 115hp & 178Nm torque, while the 1.5-litre TSI churns out 150hp & 250Nm torque. It gets features such as a single-pane sunroof, connected car-tech, ventilated front seats & a digital instrument cluster. It has a price range from ₹11.92-17.92 lakhs ex-showroom.

Tyre Construction: Its Parts and Their Function