Discover the fundamental differences between driving gear and driven gear 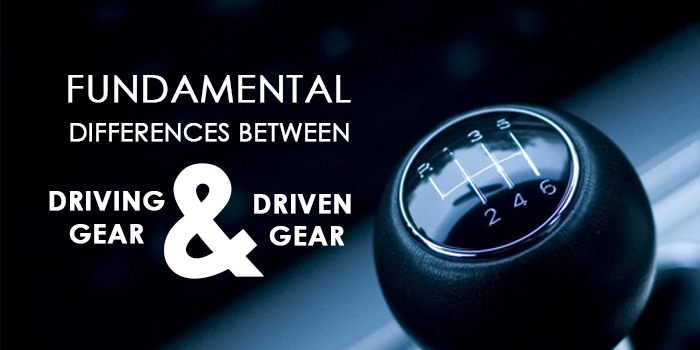 Gears are toothed wheels that transmit force to other gears by meshing with minimal slip between them. Two gears that mesh together are not the same size. The driven (smaller) gear is known as the pinion. The fundamental difference between driving gear and driven gear is that the driving gear transmits the force, while the receiving gear is called the driven gear.

The driving gear or driver is attached to a source of mechanical power such as an electric motor or internal combustion engine. The driven gear or follower is attached to the output shaft where this mechanical force is transmitted to the wheels of the vehicle, through a series of other shafts or gears.

Driving gear and driven gear form part of a mechanical system. The mechanical power from an engine, turbine or electric motor is transmitted to a driven component in the machine. The output speed and torque can be varied by using different sizes of driven gears and driving gears. Different configurations of gears will increase or decrease the rotational speed of the output shaft.


What are the different types of gear and gear drives?

There are six different types of gears depending on the orientation of their axes. There are spur gears, helical gears, double helical gears, internal gears, rack and pinion and straight bevel gears.

These are the simplest type of gear. They have their gear teeth parallel to the gear axis. Spur gears are generally used to transmit a force between two parallel shafts. These types of gears have high efficiency and high precision rating. They are most often used for high-speed applications with high loads.

Helical gears are used in applications that have parallel shaft drives. The gear teeth are inclined towards the axis. Helical gear teeth are longer than spur gear teeth. They have a higher contact ratio (a higher number of teeth are in contact with each other). These types of gears have higher capacity and can operate smoothly with less noise.

Since helical gears are inclined, they generate axial forces in addition to radial and transverse forces. Bearings tend to wear out faster with helical gears. Bearing life can be increased by using multiple step configurations by alternating the inclination of helical gears on the same shaft.

Also Read The Use Of A Gearbox In A Car. Different Types Of Gearboxes.

Driven gear and driver gears can be of double helical type. They are used in power transmission between parallel shafts. Their gear teeth consist of two opposing helix angles. Axial loads are nullified with double helical gears.

Helical gears can withstand heavy loads but their complicated manufacturing makes them more costly than other types of gears.

The gears are used in cement mixers and crushers.

This is a linear type of gear. The rack is a lengthwise gear while the pinion is circular and meshes with it. Gear teeth can be of spur or helical type. Rack and pinion gears are used to convert circular motion into linear motion.

Lathes make use of rack and pinion gears in their carriage system. This type of gear system is also used in automotive steering mechanisms.

These gears are used for transmitting power through shafts at intersecting angles, most commonly at right angles.

Straight bevel gears are used in automotive axles for the differential system.

Worm gears comprise a worm wheel paired with a worm gear. The worm wheel is typically a cylindrical gear while the worm gear is a screw-shaped gear. Worm gears are used to transmit power between non-parallel shafts (non-intersecting shafts). High gear ratios can be attained with these gears and speed reduction is possible. Worm gears offer quiet and smooth operation.


Gear axes and their configuration

Gear axes refer to the orientation along the shaft on which they are installed. The gears rotate around the shaft in relation to each other. The three configurations in gear orientation are:

The gears are placed around parallel axes in the same plane. The rotation of the driving shaft (driving gear) and the driven shaft (driven gear) are in opposite directions. Spur gears can be used in this application.

The gears are placed on intersecting shafts within the same plane. Bevel gears are used in this application.


What are gear drive advantages and disadvantages?

Here are some of the advantages and disadvantages of gear drives as compared to belt drives and chain drives. All these systems are used for power transmission to transfer mechanical force from one shaft to another by engaging its teeth.

Gear drive is advantageous as compared to belt or chain drive because power transmission by gears has almost 100% efficiency.

The possible reasons why a gear and gear drive may fail could be due to abrasive wear. Driven gear and driver gears require lubrication for smooth operation and to prevent friction between them. Gear and gear drives are usually suspended in oil as they rotate.

Since gear and gear drives are made from metal alloys, they are subject to corrosion. Rust and corrosion may damage the gear teeth and cause them to wear out and slip. The high forces and temperatures they are subject to may cause initial pitting and destructive pitting.

Scoring of the metal teeth may cause the gear drive to fail as they cannot mesh properly.


How do you identify driven gear and driver gear?

Gears are simple wheels with teeth or cogs placed on their periphery. They are a mechanical system to transfer force, power, and torque, to change direction, or vary the speed from the input shaft to the output shaft.

If both the gears have the same number of teeth and are of the same radius, then the driving gear and driven gear both rotate at the same speed but in opposite directions.

Automotives use gears in their transmission system to increase the efficiency of the engine when the vehicle moves through different surfaces and uphill. Drivers typically engage low-range gears (1st and 2nd) to provide better acceleration and higher values of torque. High-range gears (3rd and 4th) are used when the driver requires high speed out on the open road.

Driving and driven gears can be constructed out of several materials such as cast iron, steel, fibre and stainless steel.

Each of these materials offers advantages in terms of manufacturing them and during operation.

Cast iron is used because of its ease in manufacturing. It is also a low-cost material. Cast iron is used in high volume and large-scale construction of gears which do not require high precision.

High carbon steel and other such alloys are used for applications that require high strength in gears. The gears constructed using steel are durable and hard-wearing.

Nylon is a low-cost construction material for gears that need to be lightweight. It is also a non-corrosive material which has several advantages and applications. Nylon is suitable for large-scale production and light load functions.

Driving gear – The gear that receives power from the motor, engine or another power source. It is placed upon the driving shaft that provides the initial rotational force.

Driven gear – The gear that transmits the force from the driving gear to the output.

Idler gear – The gear that is situated between the driving gear and the driven gear. Idler gears are used for the transmission of power without changing the direction of rotation.

Tooth Profile – the cross-section characteristics of the gear’s teeth.

Configuration of axes – The orientation of the input and output shafts. Gears are placed on the shafts and rotate in relation to each other.

Gear efficiency – The efficiency of the gear is defined as the ratio between the output power and input power. (The input power is calculated minus the power loss due to friction, etc).

Gears are mechanical instruments that are used to transfer motion and power in a system. This article outlines the basic differences between driving gears and driven gears. Different types of gears are also explained along with the advantages and disadvantages of gear trains as compared to belt and chain drives.

Gears are employed in automotive applications and throughout the industry to transmit power. They can be found in several applications such as clocks, instrumentation equipment, motorised devices, and various machines. Each type of gear has different behaviours and characteristics. Some gear types are better suited to certain applications than others.

Other design characteristics such as material of construction, gear teeth shape and gear pair configurations help to classify gears.

If you own a car or bike, it most likely contains a system of gears that transmit power from the engine to the wheels. The gears in the transmission and drivetrain help move the vehicle forward.

If you found this article on gears interesting, you may also like to read about the differences between automatic and manual transmissions used in vehicles.

Another related article on automotive gearboxes you could read talks about manual transmission.

Stuck With A Flat Tyre? Learn How To Use Tire Inflator For Such A Situation