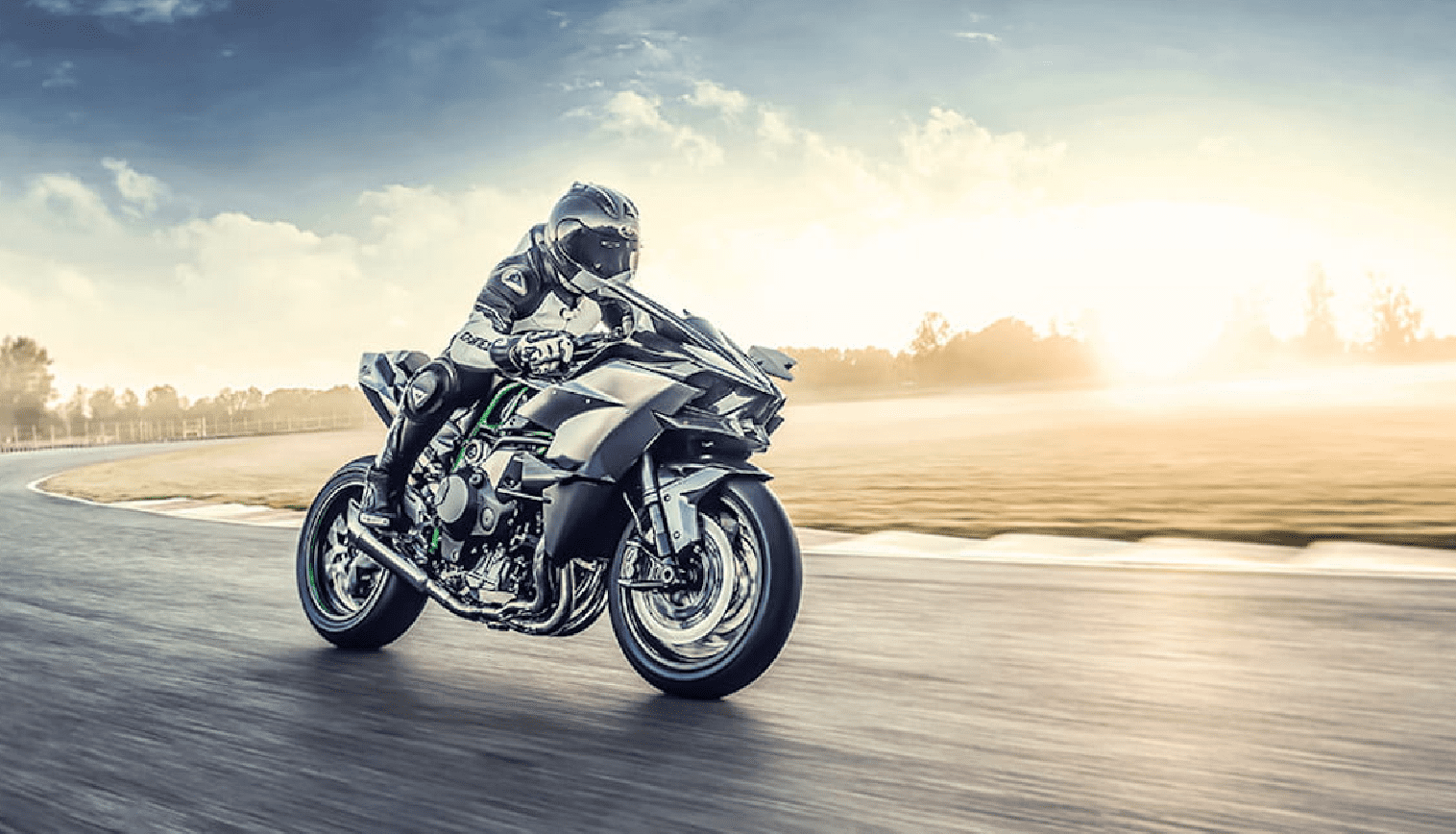 Speed is one of the most thrilling factors on a bike. The choice of bikes available today range from cruisers to sports bikes, naked motorcycles to super touring. The list is almost endless. But when it comes to speed, it’s a whole new ball game.

For speed, the sports racers are the only ones that can contend for top spot. Let’s look at the top 10 fastest bikes in the world in terms of top speed, power to weight ratio, bhp or power.

The ultimate list of the world’s top 10 fastest bikes

The superbikes mentioned below may be on your dream motorcycles wishlist. Each of these bikes are sure to increase your adrenaline rush. Not only do they look spectacular, they are the fastest bikes in the world.

This is not a motorcycle, it is a monster. It has a massive 998-cc, four stroke, liquid cooled - inline four, double overhead camshaft, 16 valve engine that makes 197.3 BHP @11,000 rpm. It has a host of proprietary traction control and braking control systems that help keep the wheels on the road at all times. And they are required, because this bike does 0-100 km/h in just 2.5 seconds.

The Kawasaki Ninja H2R is by far the fastest bike in the world today.

Another quick bike from Suzuki, the Hayabusa used to be on top spot before it was replaced by faster bikes. It features a 1300 cc engine with 204 BHP, and 155 Nm of torque. The Hayabusa has a long list of speed records thanks to its incredible engine and handling characteristics.

It has special twin stacked headlights, for superb visibility at high speeds, advanced ABS and Brembo disc brakes to bring this massive bike to a stop.

It seems that Honda releases newer and faster bikes every generation and the CBR 1100 Blackbird is no exception. It has a 1137 cc inline four-cylinder, liquid cooled engine that just loves to rev all the way to 10,000 rpm.

The engine on the ZX 14R is a 1441 cc, inline four-cylinder, liquid cooled, four valve per cylinder unit that produces 197 BHP @ 10,000 rpm. This bike is well on its way to being the fastest bike in the world given these specifications.

Another Japanese cruiser bruiser, the Yamaha YZF R1 has a proven track record in the MotoGP championship and lets riders experience this technology in a road bike. It has a powerful 197 BHP engine that has a maximum torque of 112 Nm. The power plant is a 998 cc, four cylinder that is held in an aluminium delta box frame chassis.

The YZF R1 has adjustable front forks, and swing arms that can be customised for the rider. It can touch a top speed of 298 km/h.

The BMW S1000 RR is one serious sports bike. Different from the Japanese speedsters, the bike takes its DNA from its parent company BMW. This motorcycle is capable of reaching a top speed of 303 km/h making it the fastest BMW ever produced.

The body is streamlined and beautiful for a bike from a European manufacturer. It comes with twin LED headlamps and LED DRLs for added safety while riding. Its engine is a 999 cc, that produces 206 BHP and 113 Nm of torque.

The MV Agusta F4 RC is a one-of-a-kind motorcycle. Made in limited numbers, this bike has a four cylinder, 205 BHP that can take the motorcycle all the way to 302 km/h.

In its road going form, the bike weighs only 175 kg and sports an unmistaken Italian design from its beautiful bodywork.

A true high-speed motorcycle, this MV Agusta F4 RC has a 998 cc engine, that is completely race bred.

The Aprilia RSV4 is a true-blooded Italian superbike, that excites the senses with its styling, power and speed. This particular model is a track inspired road going version of the superbike complete with Ohlins front forks and a host of traction and ride control features derived from the race track.

It has a 999cc, liquid cooled, V4 engine that produces a maximum power of 198 BHP and 115 Nm of maximum torque mated to a short shifting 6 speed transmission.

It can reach a top speed of 290 km/h making it a seriously fast bike.

This model was released to replace the BMW K1200 S. Having been in production for some time now, this BMW has an intoxicating sound from its 1293 cc, 192 BHP, hexagonal cylinder engine. It comes meshed with a 6-speed sequential gearbox to transfer all that power to the rear wheel.

With its massive engine and lightweight chassis, the BMW K1300 S can reach a top speed of 281 km/h.

This big sports bike has a 998-cc, liquid cooled, electronic fuel injection engine. It is a Rotex V-twin separated by 60 degrees and comes with a anti-vibration double countershaft for smooth and refined acceleration.

The Indian bike scene is making a paradigm shift with buyers not just wanting affordable transport, but bike enthusiasts looking for motorcycles that can take them touring, and have a fair bit of power to them. The question still remains, “what is the fastest bike in India?” as compared to which bike has the best mileage.

Bikes were once thought of a means of transport, cost effective and convenient for the rider. Over the years, motorcycles in India have gotten faster and more powerful.

Today a bike represents free spirit, speed and sportiness, adventure and touring. Sports bikes have been gaining in popularity for their high speed and big engines. More and more manufacturers are releasing models with a high-top speed to satisfy the craving of bikers. Let’s have a look at the top 10 fastest bikes in India.

The list is categorised budget wise. Listed are the fastest bikes under 1 lakh, under 2 lakh, under 3 lakh and under 5 lakhs. Also read best automatic transmission bikes in india.

Fastest bikes in India under 1 lakh

Bikes in India under 1 lakh may be small, but in terms of speed they are quite capable little machines. The best part is these bikes don’t burn a hole in your pocket, yet they give you an adrenal rush of much larger and more expensive bikes.

The same engine that powers the Hero Xtreme can be found in the 200S. It is a semi faired motorcycle which makes it a little heavier than the Hero Xtreme. Power figures are the same but the 200S is a few seconds slower due to its extra weight.

A good-looking naked bike with a refined, well powered engine, it is the third fastest bike under 1 lakh. The engine of the Pulsar is its strong point having triple spark technology. It is also one of the most powerful 200-cc bikes on the market with 23.5 HP @ 9,500 rpm and 18.3 Nm @8,000 rpm. It comes with a 6-speed gearbox.

Fastest bikes in India under 2 lakh

India’s two wheeler industry is the largest in the world, and along with the boring, daily commuters that sell in large numbers, we also have some decent fast bikes that are priced under 2 lakh. These bikes are a little bit over the regular budget, but they have bigger engines and can pack a punch in terms of speed.

Acceleration is quick with a 0-100 km/h time of 11.42 seconds which is quite respectable.

The Bajaj Dominar moves away from the sports setting to give a more laid-back riding position. Performance is quite respectable on this bike and it is capable of reaching 153 km/h on a long stretch of road.

The instrumentation cluster is well laid out with a speedometer, tachometer, trip meter and there is another display on the fuel tank showing the headlight status and ABS indicator.

Fastest bike in India under 3 lakh

The under 3 lakh fastest bikes in India have a lot of contenders, partly due to the fact that the Indian rider is specifically looking for speed, power and performance. In this price range, bikes like KTM and TVS are completely race bred and provide immense speed and power along with stylish designs.

With the release of the Duke 390, Indian bikers were introduced to performance never seen before on bikes in this price range. The Duke 390 blew the competition away with its steel trellis frame, high compression engine, braking system, exhaust note and instrumentation cluster.

The bike shares similar proportions to its younger sibling the Duke 250, but the 390 is a whole new bike differentiated by more features and a more powerful engine.

It is a naked bike that not only looks good, but performs excellent on the road thanks to its lightweight components and chassis. The bike is priced at Rs.2.58 lakh, top speed is 170 km/h and 0-100 km/h comes up in 5.5 seconds.

The dark horse from the TVS stable, this is a bike that had a lot of hype when launched but didn’t live up to all its expectations.

One of the reasons that the bike didn’t do well on sales was the high price point, the engine which suffered from vibrations and a chain drive system that wasn’t the most reliable. As a result, the TVS Apache RR 310 sold only half the number of bikes it had targeted.

The bike is now in its second generation and TVS has added a slipper clutch to the mechanicals to improve the ride. There are two colour schemes that the bike is available with, namely, red and black.

The 300 NK from CFMoto competes against the likes of the KTM 390 Duke, BMW G 310 R and the Honda CB 300 R. In terms of styling the 300 NK is spot on with its naked look, sharp design, sculpted fuel tank and aggressive front headlight. The bike comes with alloys and a unique underbody exhaust.

In fact, it looks a lot like the KTM Duke series of bikes. This is because the same design firm that gave us the Duke 390 also designed the 300 NK.

Motorcycles, due to their high power-to-weight ratio are several times faster than cars. Added to the fact that speed is felt more brutally on a motorcycle, it seems unimaginable that bike riders can hold on at speeds approaching 300 km/h. Due to modern technology, innovation and advanced components, motorcycles are now the fastest machines on the road.

Motorcycle manufacturers often can only claim top speed figures because it is impossible to reach such high speeds on normal roads. Out on a test track, in a controlled environment, it may be possible to take the bike all the way to the top, so that is where specifications are measured.

We hope you enjoyed this list of the fastest bikes in the world and in India, and that it gave you a fair idea of what a superbike is capable of when they reach their absolute limit. If you found this article informative, make sure to check out other interesting reads on the Carorbis Blog and also read how to remove scratches from bike.