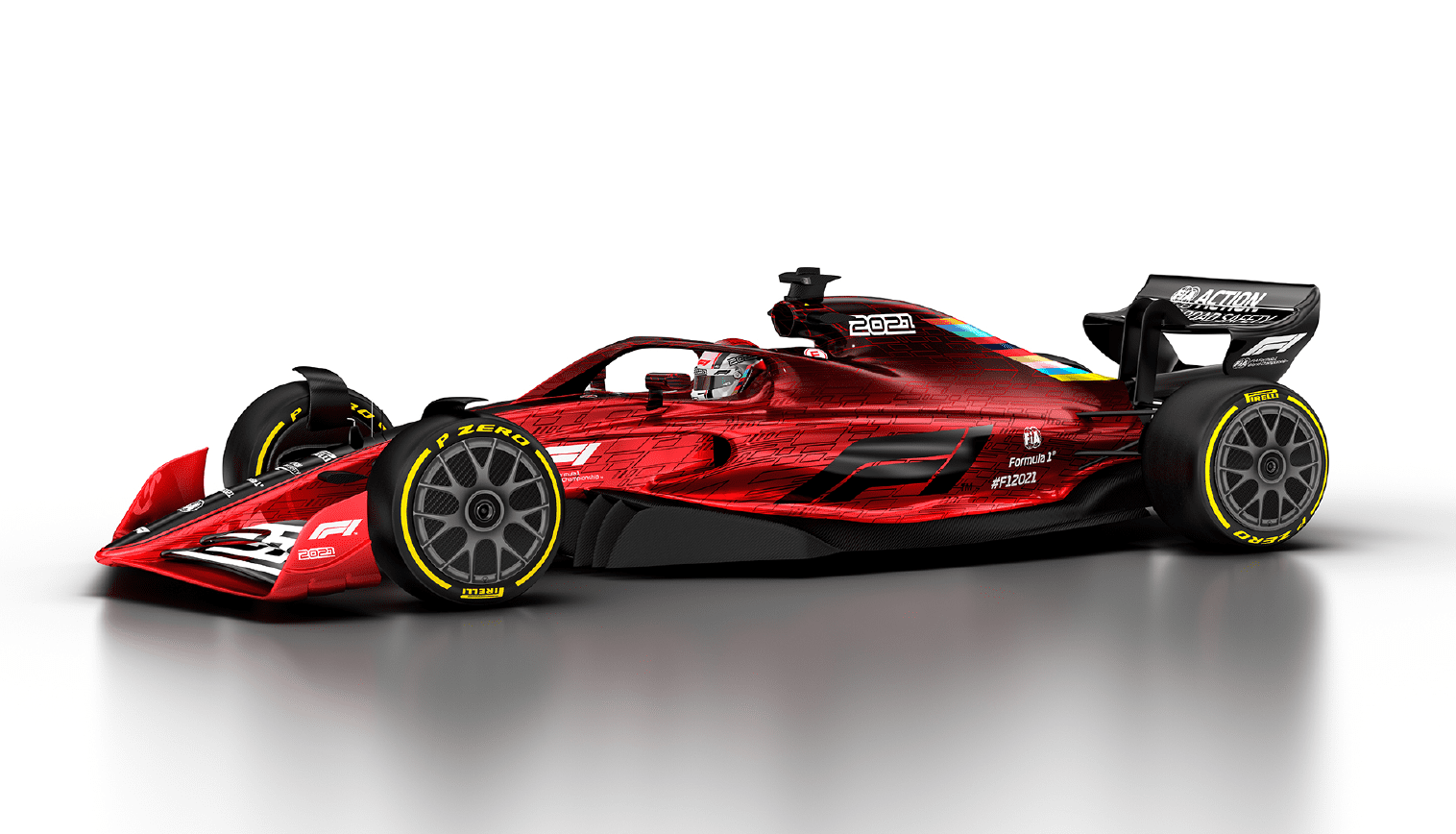 Formula 1 or F1 cars are high performance racing cars meant for tracks only. They are not driven on normal roads. A Formula 1 is a single seated, open cockpit and open wheel car. I’m sure this type of car has been the crush for many of you automobile lovers. Today, we’re going to discuss the Formula 1 engine technology in detail and how these cars attain such great speeds.

Formula 1 engines have shorter strokes. A short stroke engine can produce more power with the same engine displacement as a long stroke one. Currently, formula 1 uses a 1.6 litre four-stroke 90-degree turbocharged DOHC reciprocating  engine. The high power of the formula 1 is generated by an enormous rotational speed of about 12,000 rpm. Compare this with 6,000 rpm which normal road cars have.

The basic configuration of the formula 1 engines were the same and used traditional metal springs to close the valve until mid-1980. This limited the rpm to 12,000 max. and this system was designed by Ford. But then Renault came up with pneumatic valve springs with pressurized air. Since the 1990s, formula 1 cars use this technology which can have max. Rpm upto 20,000.

Main manufacturers of Formula 1 engines right now are- Mercedes- Benz, Renault, Ferrari and Honda. The engines can attain a max. power of upto 1000+bhp and a max. speed of upto 370 kmph. Ferrari has the record of maximum wins of 239 in the World Championship Grand Prix.

The two of the fastest F1 cars are Red Bull RB13 and Ferrari SF70H.

The Red Bull uses an engine from Renault. This car is driven by Daniel Ricciardo and Max Verstappen.

Sebastian won the 2017 Grand Prix with the Ferrari SF70H.

The year goes back to 1947. During 1947-1953 the first generation of Formula 1 was launched. This was pre war era and used some regulations like 4.5 L atmospheric and 1.5 L supercharged engines. Formula 1 was and allowed and the Indianapolis 500 was the first official F1 car. The power was upto 425 hp

Penning each era will make this blog boring to read. So, I will mention only the noteworthy eras.

For 2006, 2400cc engine with 8 cylinders in a 90° V bank, was the norm by the regulatory body. From here on, we have seen the new 90-degree engine in which cylinders are arranged in perpendicular to each other.

An engine must weigh at least 95kg. Limited to be built with Aluminum alloys (with ceramics, metal matrix and magnesium alloys forbidden). This specified the metals which could be used in the engines of F1 cars.

All components of the engine and gearbox, including clutch, differential and all associated actuators must be controlled by an Electronic Control Unit (ECU) which has been manufactured by an FIA designated supplier. This was the norm. So, ECU was introduced

So, special attention was given to the ERS now and fuel efficiency was a concern too.

After 2018, we already have today’s engine in the beginning of this blog. The ERS system has been made more efficient and fuel efficiency has also been improved. The overall power is highest ever since the first F1.

How are F1 cars such an efficient performer? How does Formula engine work?

Basically, an F1 engine works in the same way as any normal engine would work. It works on a piston- cylinder model. If you don’t quite understand how an engine works, don’t worry I’ve got your back.

Currently, F1 engines are restricted to 2.4L 90-degree v8 configuration. What this means is- there are two cylinder bands of 4 cylinder and they are at 90-degree to each other or you can say they are perpendicular to each other. This is the layout of the engine.

The cylinders have 4 valves like many modern day cars but what is special is its 18,000-20,000 rpm limit. The cylinders are wide but short or shallow. This is known as short stroke. So, the piston can move up and down very quickly as it has a lot less distance to travel than other engines. In this way, such high RPMs are possible to achieve.

An internal combustion engine is a heat engine which converts the heat energy which is generated by burning the fuel into a mechanical force or torque. Engines have  pistons which go up and down inside metal tubular structures known as cylinders of an engine. An easier way of looking into this is imagining pedaling a cycle Where we move our legs up and down when pedaling. Pistons are connected to crankshaft via rods, they move up and down and spin the crankshaft which in turn drives the wheels.

Where does engine power come from? When the pistons are going up and down, there are combustions, or power. Each time a combustion or mini explosion happens, the piston is pushed back to the cylinder.

What are Formula 1 engines made of?

In modern times, a standard Formula 1 engine is made of forged aluminum alloy. It is lighter than steel which serves as an advantage.

Secret behind the performance of an F1 car: How does an F1 car work?

There are various factors which have made F1 cars successful. It has other factors behind it and not just the engine.

First, let’s talk about aerodynamics which is how the car interacts with or moves through the air around it. It’s best to discuss the overall aerodynamics design here than being lost in the maze of discussing individual aerodynamic features.

The front wing curves upward forcing the air to move around the car in such a way that high pressure is created above the wing and low pressure beneath the wing. This pressure difference creates a suction force and  makes the car stick to the track and gives stability.

Unlike other road cars which we see day to day, which use a chassis to hold various components, an F1 car doesn’t have a chassis. A carbon fiber shell called a monocoque, the engine heads and blocks and the gearbox forms the main structural support for all other systems of F1 cars. There is no additional frame or chassis underneath.

Suspension setups are very simple as they are not meant for comfort. Both front and rear suspension have the same setup. There are wishbone-like structures which attach to the wheels. This has limited vertical travel and acts as suspensions. In the font, the wishbones are attached directly to the monocoque where heat is not an issue. But in the rear, the wishbones cannot be attached directly due to engine heat and are attached via ball bearings.

The steering system is closely packaged with the front suspension. A track rod links each wheel with a rod and pinion setup. F1 steering is not as tight as normal cars. That is, they can’t take taught turns which makes them unsuitable to ride on roads. All wheels of an F1 car are attached to string cables known as wheel tethers which can hold the wheels in case of an accident.

In the front portion, a master cylinder and reservoir controls and  stores hydraulic fluid for braking. F1 cars have two master cylinders and accompanying reservoirs for front and rear brakes respectively. Brake lines go to wheel brake assembly through the suspension system. When pedals are pushed, the fluids apply pressure to the brake pads.

Various radiators are present. This includes the main engine radiator, oil cooler and a battery coller. A separate band of coolers are present in the upper side of the body which cools the hydraulics, gearbox and the ERS system.

A fuel tank or fuel cell is made with rubber lining and is puncture proof. It occupies a separate space in the carbon fiber monocoque and fills all available space. F1 cars can hold a  whopping 115 - 150L of fuel which is enough for just a single race as fuel efficiency is only around 1.7 - 2.55 kmpl.

The engine oil tank is fitted in between the fuel tank and the engine.

F1 cars have robust safety systems as they move with high speeds. The rear crash structure protects against any impact. Side crash structures are concealed within the aerodynamic module. The removable front nose section handles the front impacts. And the all surrounding carbon fiber monocoque forms a cocoon around the driver.

The seat is designed with molds from the driver. It is completely in sync with the driver's body structure. The driver settles in a semi- lying posture and the feet are stretched very forward. A 6 strap system holds the driver onto the seat and limits any movement. There are braces in the neck and head which will limit head movement in adverse conditions so that the driver doesn't get any injury.

A drink tube comes near the shoulder to keep the driver hydrated while racing. Cockpit area makes use of all the available space such that the driver must remove the steering wheel before entering or exiting the car.

There are two foot paddles- the left one for the brake and the right one is the gas paddle.

As you have seen by now, it is not only about the engine which makes the Formula one so different from other cars but all the components in it are different and designed as per racing only.

Do F1 cars have hybrid engines?

Well modern F1 cars do have hybrid engines. But it is not at all similar to a normal hybrid car which has a combination of petrol or diesel engine along with EV motors to boost fuel economy.

Hybrid system is called the ERS or Energy Recovery System in F1 cars. The MGU-H (Motor Generator Unit Heat) and the MGU-K (Motor Generator Unit Kinetic) together form the hybrid functionality in a modern F1 car. Both generate electrical charge for the battery. Once the battery is fully charged, the battery sends power back through the MGU-K unit which is connected to the crankshaft. In this way, the MGU-K can generate an additional 160 hp or as much as a separate car engine.

So, as you’ve seen the hybrid technology here is not for the fuel efficiency but for a further performance boost.

Today, in this blog, we have learned everything about F1 cars. How an F1 car is different from a traditional car and what components it has and other things. Hope your automobile enthusiasm was satisfied with this blog.

Differences Among the 3- Hypercar Vs Supercar Vs Sportscar