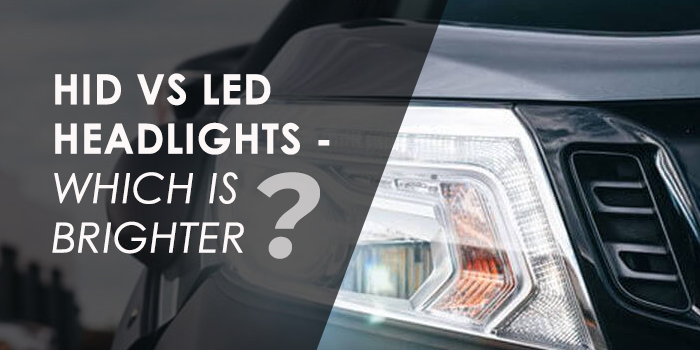 Headlamps are one of the most crucial safety components onboard any vehicle. Not only do they allow us to drive at night, but they also increase the night-time viewing field so that you reach home safely to your loved ones. But in order to reap the most out of your headlamps, it's important that you use a bulb that’s not just efficient but also bright. Amongst some of the brightest headlamp bulbs on the market, HIDs and LEDs are two of the most popular ones. But have you ever wondered which is brighter and better in the race of HID vs Led headlights? Well, let’s find out.


HID vs LED Headlights - Which is Brighter?

To answer the question of the hour, it is essential to know important aspects of both lights, including the technology that goes behind in the working of both bulbs. So without further ado, let’s get started.


What are HID Lights?

HIDs or High-Intensity Discharge bulbs is an umbrella nomenclature used to refer to a family of gas-discharge arc lamps that produce light by an electric discharge that is sent between two electrodes through ionised gas or plasma. Additional gas is also used in HID, which can also be used to classify the various types of HIDs which include: Metal Halide, Sodium and Mercury HIDs.

HID lights require a device termed ballast in order to send the requisite voltage to light up the fluorescent lamp and later regulate their optimum power levels. World-renowned for their high efficiency and large lifespan, HID headlights were first used by automaker BMW back in the 1990s. Since then, HID lights for cars have been quite a charm in the automotive Industry.

Also Read Which Mirror Is Used in the Headlights of a Car?


How do HID Lights Work?

In the world of automotive headlights, HIDs, also dubbed as XENON headlamps, work by sending an electrical impulse between two electrodes usually made of tungsten and which are housed within an arc tube that’s typically made out of quartz. The tube is filled up with an amalgamation of gases and metal salts.

When the initial surge of electricity created by an integrated starter/ballast triggers the gas inside the lamp, the arc heats up the metal sals creating a plasma, which then substantially increases the light produced by the arc, thereby emitting a source of light that is brighter, more efficient and does not produce much heat as compared to traditional headlamps such as halogens.

Also checkout How To Remove Moisture From Headlights


What are the Pros of using HIDs?

The HID technology is in working for several centuries and is best used for its high intensity, high efficiency and high coverage light coverage. The biggest advantage of modern-day HID headlights is the fact that they produce more light per energy unit than traditional halogens since only a small proportion of energy is emitted in the infrared spectrum.

On average, HIDs use 20-30% less energy than halogens. Moreover, HID headlights offer a larger spectrum of visibility and have a longer-lasting lifespan that makes them cost-effective. They are also more attractive than bulky halogens making HID lights for cars totally cool.

What are the Cons of using HIDs?

There are two sides to every coin and this is true even for HIDs. One of the biggest disadvantages of an HID is the fact that when used in automobiles, HIDs tend to blind the oncoming traffic. Also, since HID light is omnidirectional, more reflecting parts are required to focus the beam on the road.


What are LED Headlights?

LED or Light Emitting Diode is a type of headlight bulb type that is widely used for its extremely large lifespan, uniform energy-efficient lighting and affordability. A diode is an electrical component that has two electrodes namely an anode and cathode, through which unidirectional current flows. LED lighting is a “solid-state” technology, which means that the materials used to generate light are encased within a solid material, such as an epoxy lens. This gives LEDs a much longer life span as compared to traditional halogens.

LED diodes are typically made out of semiconductive materials such as selenium or silicone which are solid-state substances that only conduct electricity in certain circumstances and not in others. When an electric current is passed through semiconductive materials, visible light is emitted as photons which are particles of light and this entire process is termed electroluminescence.


How do LED Lights Work?

The working of an LED is rather simple, with little to go wrong, and can be understood in comparison to a conventional halogen, where light is emitted when an electric charge passes through a tungsten wire.

On the other hand, LEDs, instead of tungsten wires, use semiconductors which produce light photons when triggered by an electric charge. Semiconductors of an LED only work when the current is unidirectional i.e. flowing from the anode to the cathode. And since the purposes of automotive lighting use, the light produced by an LED must be roughly white, for which LEDs make use of the RGB system that works by mixing the Red, Green and Blue diode output in close proximity to create white light.


What are the pros of using LEDs?

First things first, LEDs are widely popular for their low maintenance cost, hassle-free use and light quality. Going into the details, LED headlights offer the advantage of a really long lifespan as compared to other lighting technologies, including HIDs. An average automobile LED can last about 1,00,000 hours or even more.

Secondly, LEDs are extremely efficient bulbs. This is due to the fact that LEDs waste negligible energy in the form of infrared radiation. Another advantage of LEDs is that they emit a directional light which implies less reflective mirrors or surfaces to focus on.

Also read How To Restore Headlights At Home Professionally


What are the cons of using LEDs?

Despite several advantages, LEDs are relatively pricy. The up-front cost paid to upgrade to LED is much higher than conventional halogens. This is the biggest drawback of LEDs which, if cost ignored, are the best alternative as a headlamp bulb.

Also read How to Adjust a Car Headlight?

Now that you are clear as to how both technologies work and what are their pros and cons, let’s pitch both lighting technologies head-on against each other.

Also read How to Replace the Turn Signal Bulbs

While automotive lighting solutions have come a long way since their inception, LEDs still continue to be the most cost-effective, advanced and advantageous headlight solution to date. But with that said, HIDs are not far behind in offering an efficient and cost-effective alternative to halogens. But when both are pitched against one another, then LEDs shine out with their specific advantages, despite their shortcomings.

This article should help you learn about HID vs LED light. Other interesting articles on our blog including A Guide To Know About Light Bars and Different Types Of Car Lights or you can visit Carorbis Blog for more.

Ans: Yes LED headlights are legal in India and can be retrofitted easily if not OEM available.


Q2. Why LED lights are better?

Ans: LEDs are better due to their high lifespan, low wastage of light, high efficiency and simple structure.

Ans: Yes LED headlights are legal in India and can be retrofitted easily if not OEM available.


Q4. Which led lights are the best?

Ans: A lot of companies sell LED lights, however, a few popular names include Philips and Osram.

Ans: In all possible ways, be it brightness, throw, lifespan or efficiency, LEDs are better than halogens.


Q6. Do LED headlights only work on high beams?


Q7. Will LED headlights work in my car?

Ans: Yes LEDs can work with all types of cars.

Ans: Yes LED headlamps will work with DRLs which itself is often made up of LEDs.