How to Jack Up a Car step by step 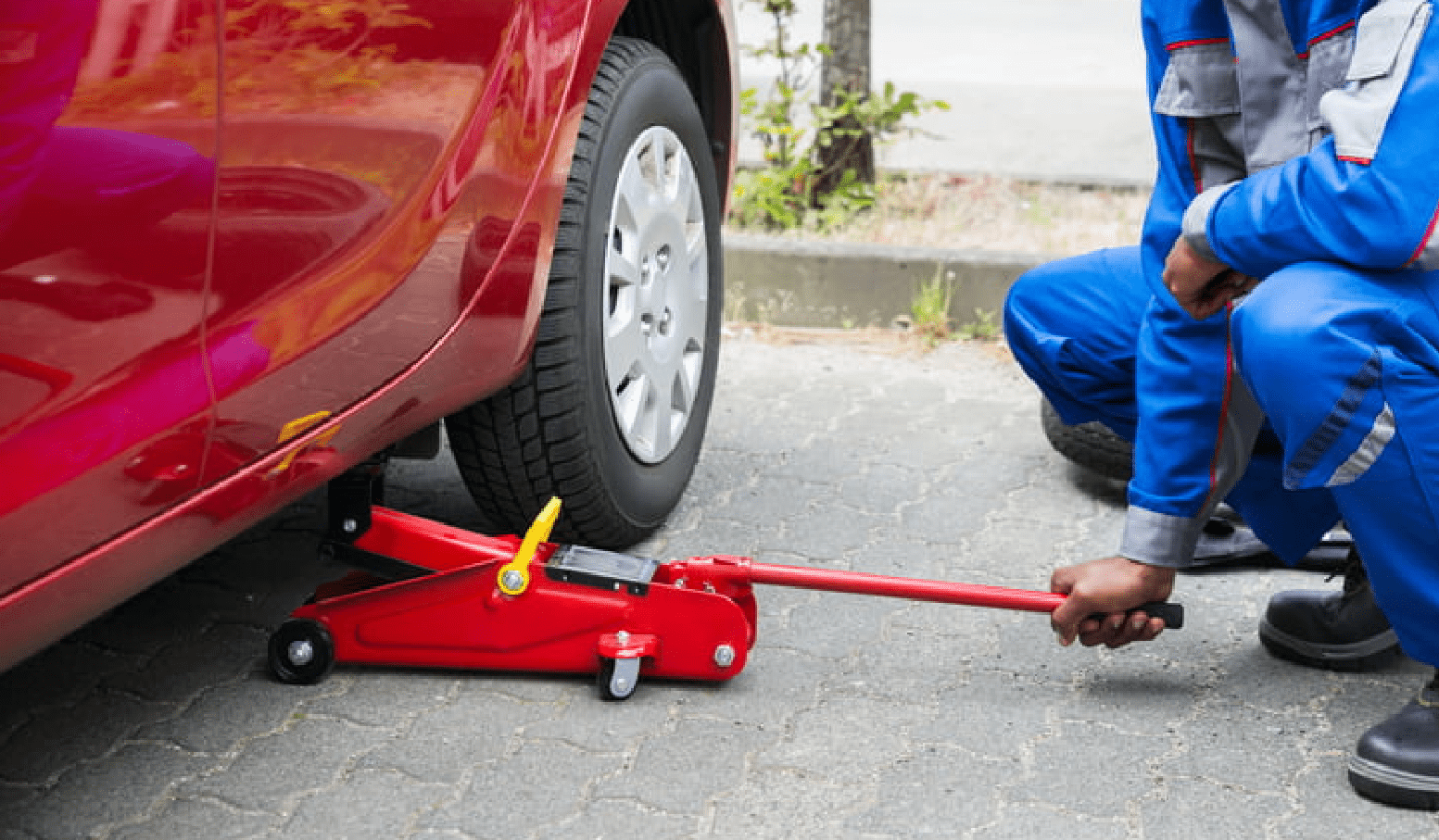 If you are planning on doing some DIY repairs on your car like changing the oil, replacing a tire, or checking the undercarriage of your vehicle for damage, you most likely have to make use of a jack.

A jack is used to lift up the vehicle so that you can perform repairs or get underneath the vehicle. After lifting up the vehicle, it is advised to use jack stands or axle stands to keep the car in the air.

It is not a smart idea to keep the car lifted up using the jack only, because it is not stable as a stand and the car may fall while you are underneath.

Take safety precautions before using the jack to lift the vehicle. Make sure the car is on level ground and the e-brake has been engaged. You can even chock the wheels so that the vehicle doesn’t move.

Steps to jack up a car

Use the following guide to learn how to safely use a jack and axle stands.

Park the car on level ground. If you have to park on an incline, make sure to engage the hand brake and put the vehicle in first gear. Turn the wheels towards the curb or footpath in case the car is parked on an incline.

Block the wheels with a wooden block, bricks or wedges to prevent the car from accidently rolling while the jack is engaged. If you lift only the front of the car, then block the rear wheels, and if lifting the rear of the car, block the front wheels.

Avoid using the jack on soft soil or dirt, especially if you have to get underneath the car. If there is no other option, then stabilise the jack with a wooden plank so that it stays in place.

Using the jack to lift the car

Ensure that the jack is designed to lift the weight of the car. A jack that is not recommended for the given weight may fail and cause an accident. Check the owner’s manual for the placement of the jack when raising the vehicle. This is usually behind the front wheels or ahead of the rear wheels.

If you only need to lift one wheel, then use the jack only at that particular corner. If the while rear or front needs to be lifted then use the jack at the centre position between the wheels using the frame or the suspension to lift the car.

If you are making use of jack stands or axle stands, keep them near the point where the jack is resting so that hey can easily be placed.

Depending on the type of jack that you have, for example scissors jack, hydraulic jack, you will have to pump the jack to lift the vehicle off the ground. Lift the car to the height that is required to change the tire, change the oil or repair any part of the undercarriage.

Making use of the jack stands

Once the jack stands are in place, give the car a little wobble to see if they are secure. Avoid the use of a wooden box or bricks instead of jack stands. They may not be stable enough to support the car's weight.

When you have finished replacing the tire or conducting repair work, use the jack to lift the car about an inch and remove the jack stands. Let the jack down slowly to bring the car to the ground.

Remove the wheel locks which you had used. You can even make use of car ramps if you don’t have access to a jack. The car will have to be driven up the ramps so that the vehicle sits a few inches above the ground.

Car ramps are secure and you don’t have to lock the wheels to keep the car in position. The only disadvantage is that a tire cannot be changed using car ramps and they are also a little bit more expensive than jacks.

Using the jack to lift or raise the car in a proper way is essential for DIY repair work at home, without the help of a trained mechanic. Changing tires or replacing the oil can be a challenging task if you don’t know how to use a jack properly and safely. Read 5 sign of low engine oil pressure.

Using a car lift or ramp is usually reserved for use by mechanics in workshops. Using a car jack and jack stands allows you to make repairs right at home and care for your vehicle yourself.

We hope this guide helps you in a step-by-step way to learn how to raise a car using a jack and jack stands.

Q1. How do you jack up a car from the front?

If you need to access just one wheel, then it is a good idea to jack up only one corner of the car. When you need to lift the entire front or rear of the car, choose a central point on the body frame or you can even use the suspension as a solid point.

Q2. How to jack up a car without a jack

Ans. You can use a curb, incline, naturally elevated area, or footpaths to lift one corner of the car. An easy way to change a tire without a jack is to dig the soil beneath the flat tire. You can use a shovel to get the desired space underneath the tire to change it.

Keep on digging the soil until you have enough room. Loosen the tire nuts, change the spare tire, and tighten the nuts back in place. Now fill in the soil you have dug out until you can drive safely away.

Q3. How do you jack up a car for oil change?

Once you are certain that the car is secure with jack stands, then you can proceed to move underneath the car and change the oil.

At this point, do not lean against the car or rest on the engine bay when it is lifted up. Any un due pressure on the car may cause it to fall off the jack stands and cause an accident.

When you have changed the oil, use the jack to lift the car just enough to take away the jack stands, then lower the car gently to the ground with the use of the jack. Read how to check engine oil level.

Ans. There are lifting points on the car frame between the wheels, at the front and to the rear. If you need to lift the car at only one end, place the jack at the appropriate area of the frame or suspension and jack up the car until you can place jack stands beneath.

Ans. Place the jack beneath the car at the appropriate space in the frame depending on which tire you need to change. Jack stands should be placed right near the jack at the lifting point. Your owner’s manual will give you the correct placement of the jack when changing the tire

Q6. Where to jack up a car with a trolley jack

Ans. Make sure the car is on level ground and lock the wheels using a chock or the e brake(hand brake). The release valve should be in the closed position to keep the jack ready to lift. Position the jack right underneath the lifting point (usually behind the front wheel and ahead of the rear wheel).

Pump the handle up and down until the saddle comes in contact with the frame of the vehicle. Keep raising the jack until you have enough space to place a jack stand.

Ans. Place the jack in between the rear wheels at the centre, preferably at the differential or at least on the axle. Avoid placing the jack under the rear bumper because this part will not be able to support the weight of the car.

Use the floor jack at the rear of the vehicle. Lift he vehicle at the designated point and place jack stands or axle stands underneath the axle. After you finish working on the raised vehicle, use the jack to lift the vehicle a little, remove the jack stands and then lower the vehicle using the jack.

Q8. Where do you place the jack under a car?

Ans. Vehicles have designated points underneath the frame where the jack is supposed to lift the vehicle. Using the jack at another place on the frame may damage the vehicle because it may not be able to support the weight, or even worse, the jack may slip and the vehicle may fall.

The owner’s manual will tell you exactly where the jack needs to be placed. Usually, the points are just behind the front wheel or just ahead of the rear wheel.

Q9. What part of the car do you jack up?

Ans. For most cars, the jacking point are reinforced parts of the frame with metal ribs designed to lift the vehicle safely. They would be four jacking points for the vehicle situated behind the front wheels and ahead of the rear wheels.

If you are unsure about exactly where to place the jack for lifting, then refer to the owner’s manual. The manual will specify the exact location that you have to use to jack up the vehicle.

Ans. A lowered car looks sporty but it may be a problem to fit a jack underneath. Some cars are just too low for the jack to be placed underneath the car.

One solution is to stack up a couple of pieces of wood in front of the tire. Then slowly drive on to it. This should give you enough space to fit the jack underneath the body.

If it still isn’t high enough, stack up more pieces of wood to increase the height.