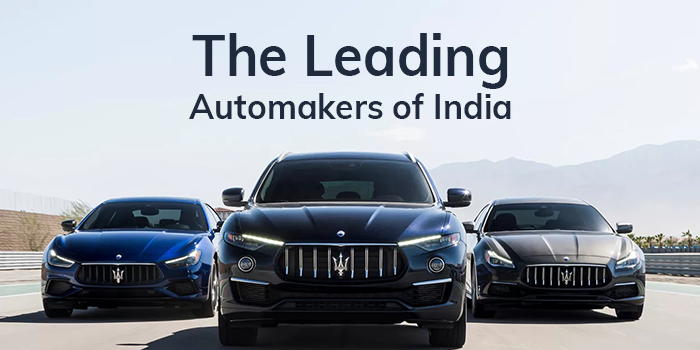 Back in the day, the Indian automobile industry was a rather slow-growing arena with only a handful of OEMs and cars to choose from. Fast forward to the 21st century, the automobile industry in India has changed from head to toe with several automobile companies in India offering vehicles in all shapes and sizes, tailor-made for every consumer need.

Much like the industry itself, automotive companies in India have undergone a significant evolution, playing a crucial role in redefining the way Indians look at mobility.


Here is the list of top 10 automobile companies in India


Established in 1981, Maruti Udyog collaborated with Suzuki via a joint venture in 1982, giving birth to what we hail as “Maruti Suzuki”. With a view of catering to the masses, Maruti Suzuki has for over 4 long decades, touched almost every milestone of success and has delivered millions of vehicles. In fact, it wouldn't be wrong to say that Maruti Suzuki was indeed the first car for many Indians, making it one of the best automobile companies in India.

Proudly holding the title of India’s largest car manufacturer, in the financial year 2022, Maruti Suzuki held a 42% share in the passenger car market, making it lead the list of the top 10 automobile companies in India. The massive success of the OEM can be attributed to its affordable fleet of vehicles that are efficient, practical and low maintenance. With the largest sales and service network across India, Maruti Suzuki offers hatches, sedans and SUVs.


Fondly remembered as one of the first foreign automobile companies of India, the Korean automotive giant entered India back in 1996 with the Hyundai Santro as its first offering. Since then, Hyundai has never looked back and has risen to become the second largest automobile company in India in terms of market share.

Holding a market share of 16.24% (FY 2022) in the passenger car market, Hyundai’s success has been driven by vehicles that look elegant, luxurious and attractively distinct. One of Hyundai’s many strong suits is its premium interiors, feature-rich offering and commitment to quality service, which is fulfilled by Hyundai’s wide network of service centres across the nation. From fluidic design to sensuous sportiness, Hyundai’s design language has always attracted buyers that have a keen eye for design which is well reflected in Hyundai’s entire fleet comprising of hatchbacks, sedans, SUVs, MUVs and even Hyundai Electric Cars.


Tata Motors – The Pride of India


The most sought-after Indian car brand, Tata is a name that makes every Indian proud, irrespective of which car brand they own. Established in 1945, by JRD Tata, Tata Motors, has not only witnessed the growth of the automotive industry in India but has also played a crucial role in its evolution. Rightly acclaimed as one of the best automotive companies of India, Tata Motors is a name worth all the fame.

From collaborating with brands like Mercedes to now owning brands like Jaguar Land Rover, Tata Motors has managed to evolve not just its cars, but also its popularity. With a brand revamp in 2015, Tata Cars are now synonymous with impeccable safety, capable and durable engines and great build quality. Holding 11.45% of the share in the passenger car segment (FY 2022), Tata has also been at the forefront of the EV revolution with products like the Nexon, and Tigor EV. Other than that, Tata also offers hatches, sedans, SUVs and MUVs.


Mahindra and Mahindra – The SUV Legacy


A name whose roots are even older than India’s independence, Mahindra and Mahindra was established about 77 years ago, primarily as a steel trading company. With time, however, Mahindra made its way into the passenger car market with the Mahindra Major, which millions of Indians fondly remember as the Mahindra Jeep.

Since then, the brand has been associated with a rich SUV legacy and is known for making vehicles that are rugged, multi-dimensional and highly practical. Hailed for making some of the toughest SUVs that does not shy away from any terrain, Mahindra is the proud manufacturer of cult cars such as the Thar, XUV, and Scorpio. Holding a share of 6.86% (FY 2022) in the passenger car segment, Mahindra focuses primarily on SUVs when it comes to passenger cars. Recently Mahindra has also announced 5 new electric SUVs, which will make the OEM one of the few automobile companies in India offering EVs.


Sharing its roots with Hyundai, this South Korean carmaker shook the Indian automotive industry and saw a massive spurt of popularity when it launched its debut vehicle; the Kia Sonet back in 2019. Since then, Kia has managed to give a tough time to competitors with its practical, well-budgeted and luxurious cars, helping the brand become one of the top 10 automobile companies in India.

To capture segments that blend affordability and luxury, Kia targets consumers that want more for less. Holding a market share of 5.71% (FY 2022), Kia’s current fleet of SUVs, MUVs and EVs are known for their distinctive style statement, ample premium features, and a balanced drivetrain that makes the brand one of India’s best automobile companies of India, and rightly so.


Toyota Kirloskar Motors – Goes On and On and On


Entering India via a joint venture with the Kirloskar Group in 1997, the world-renowned automotive giant, rose to fame with its durable cars that checked all the boxes in terms of consumer demands. With products such as the Innova, Fortuner and Corolla, Toyota’s strategy of bringing already popular names to Indian soil has worked quite well for the brand and has helped it reach one of the top spots in the list of the top 10 automobile companies in India.

Holding a share of 4.05% (FY 2022) in the passenger car segment, Toyota’s entire fleet is known for its durable engines, ruggedness, elegant yet aggressive looks and premium approach. Some of the most popular cars from Toyota are known to clock in even 10 lakh kilometres on the odo without breaking a sweat! Proudly manufacturing hatches, SUVs and MUVs, Toyota is even set to bring a pick-up truck into the Indian market.


Renault – A Ride That Won't Disappoint


Entering India in 2008, the French auto giant Renault in alliance with Japanese OEM Nissan, rolled their first offering Duster in 2012. Ever since the launch of the Duster, Renault’s brand image upscaled manyfold, making it one of the leading automobile companies in India. The Duster’s success was so huge that the vehicle earned as many as 29 awards including the prestigious Indian Car Of The Year (ICOTY) award.

With Duster establishing Renault as a capable brand, awesome ride quality, ample safety, and superb handling became Renault's strong suit. With the launch of the Renault Kwid, the brand also managed to establish itself as an affordable OEM that makes vehicles that are in no way less than their premium counterparts. With hatches and SUVs on offer, Renault held 3.08% of the market share in FY 2022.


Making its debut in 1995, the Japanese Carmaker has successfully established its brand identity in India, now standing as one of the many successful automobile companies of India. With its first offering; the Honda City, still ruling the hearts of avid sedan lovers, even in the R&D department Honda has had its fair share of success.

Honda’s USP is its smart i-VTEC petrol engine technology has been one of the best engine advancements since 2008 and is powering a fleet of Honda cars. Replicating the glory, even the i-DTEC diesel engines left quite an impression. Known to build vehicles that offer a distinct Japanese touch and a remarkable fanbase, Honda cars offer the best powertrain experience, premium interiors and good mileage. Holding 2.86% of the market (FY 2022), Honda is indeed one of the best automobile companies in India.


One of the most revered automobile companies in India, Volkswagen entered India back in 2007, with its global flagship sedan the Volkswagen Passat. Since then, Volkswagen never turned back and enjoyed a streak of success with cars such as Polo, Polo GT, Vento etc. While Volkswagen as a brand isn’t one of the largest OEM in India, the Volkswagen group comprising of brands such as Skoda, Lamborghini, Bugatti, Audi etc. is indeed the second largest car maker in the world; a testament to the rich legacy of Volkswagen cars.

With a market share of 1.87% in FY 2022, Volkswagen cars are known to offer impeccable performance, great handling, premium interiors and tough build quality and best-in-class comfort. Amongst other USPs of the OEM, include the TSI turbo-petrol engine which is one of the peppiest engines in the market that offers supreme ride quality and power. With capable sedans, SUVs and MUVs on offer Volkswagen has rightly earned a spot in the list of automobile companies in India.


The British automaker, Morris Garages Motors made first entered India in 2017 and launched its first offering; the MG Hector in 2019. Much like KIA, MG Motors too was in for a wave of positive response largely driven by the ample amount of technological advancements that MG Motors brought to the SUV segment. Since then MG Motors has been synonymous with top-notch technology and has been credited with introducing features such as “connected car tech” first time in India.

Sharing a legacy of feature-rich vehicles, MG Motors after the massive success of the Hector brought vehicles like Gloster, ZS EV, and MG Astor among which the Gloster became the first mass-market vehicle to bring Advanced driver assistance systems (ADAS) onboard an Indian car. Holding 1.3% of the market in FY 22, MG Motor continue to offer cars that are affordable, and premium and offer all luxury as well as technically advanced features that make driving more pleasurable.

If you found this article on Automotive companies in India, you may also want to read about Top Car Brands in India Updated March 2022 and Facts About The Indian Automobile Industry or visit carorbis blog for more blogs like this.


Q2: Which are the top three car manufacturers in India?
Ans: By sales volume, the top three passenger car makers in Financial Year 2022 are Maruti Suzuki, Hyundai and Tata Motors.

Why Your Next Car Should Be An Executive Sedan: Volkswagen Virtus vs Honda City