What We Love And Hate About These Compact SUVS: Renault Kiger vs Nissan Magnite vs Kia Sonet 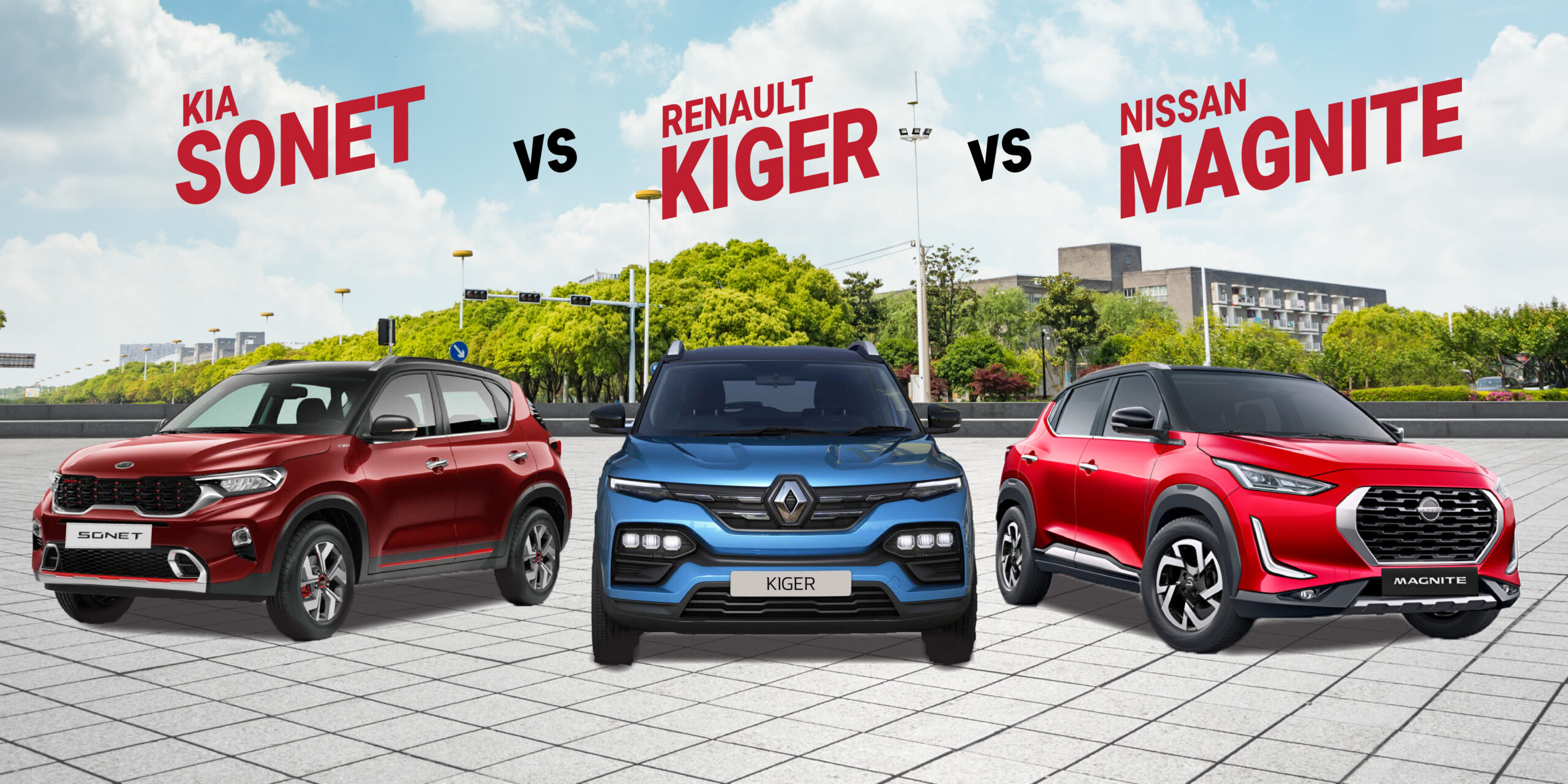 The sub-4 metre compact SUV segment is the most populated place in the automotive market with heavy competition from the Renault Kiger vs Nissan Magnite vs Kia Sonet. All of them are aiming to make their mark in customer sales by offering the best engine options, interior comfort, practicality, and reliability. The Nissan Magnite vs Renault Kiger are based on the same platform and share a lot. While the Kia Sonet is poised to take the top spot.

We already have numerous models on sale in India in this segment, which includes the likes of the Tata Nexon, Hyundai Venue, Mahindra XUV 300 and the Maruti Suzuki Brezza, but we will be looking at the main contenders this time, Renault Kiger vs Nissan Magnite vs Kia Sonet. Let’s have a detailed comparison with these best-selling SUVs.

The siblings Nissan Magnite vs Renault Kiger share the BS 6 compliant 1.0 litre naturally aspirated petrol engine churning out 72 bhp and 96 Nm of torque. They also each get the 1.0 litre, turbocharged petrol engine with a maximum power output of 100 bhp and 160 Nm of torque. Both engines get the option of a 5-speed manual gearbox, while the turbo petrol gets a CVT (Continuously Variable Transmission) and the Renault Kiger gets the option of an AMT (Automated Manual Transmission).

The Kia Sonet sub-compact SUV gets a BS 6 compliant 1.2 litre, naturally aspirated petrol unit or a 1.0 litre turbocharged power plant. The 1.2 litre engine has a maximum power output of 83 bhp and 114 Nm of torque. This NA (Naturally Aspirated) engine gets only the 5-speed manual transmission as an option while the turbocharged unit gets either an iMT (6-speed) or a DCT (Dual Clutch Transmission) automatic with power figures of 112 bhp and 250 Nm of torque.

The Nissan Magnite crossover SUV comes with projector LED headlamps and sleek DRLs. The lower part of the exterior is covered in black, plastic cladding and gets functional roof rails. Wheels are 16-inch alloys and there is a rear defogger, rear-view parking camera with parking sensors. Nissan offers a dark interior for the Magnite, and plenty of storage areas within the cabin. It gets a leather wrapped steering wheel, with cruise control and telephone control buttons. The infotainment system comes with Android Auto and Apple CarPlay connectivity, while the instrument cluster has a 7-inch fully digital display.

The Renault Kiger gets 16-inch alloys with red caps and has a sculpted bonnet with a 3D grille along with honeycomb-shaped headlights. It resembles the Kwid from certain angles, although the squared off wheel arches are the talking points of the styling. Both the Kiger and the Magnite get them but they look a bit sharper on the Magnite. Interiors on the Kiger include a new red fade dashboard, quilted seat upholstery, cruise control, and wireless smartphone charging. There is also an 8-inch touchscreen infotainment cluster and a digital instrumentation cluster.

The Sonet gets the signature Kia tiger nose grille, LED headlamps, projector fog lamps, LED tail lights, functional roof rails and 16-inch alloy wheels. The body style can be best described as modern, yet youthful and Kia has given the compact SUV a newly designed Sonet logo. Interiors include a two-tone upholstery, a tyre pressure monitoring system, a touchscreen infotainment cluster, and a redesigned rear-view mirror that has the Kia Connect button integrated in it.

The Renault Kiger does remind one of the Kwid with some styling cues, such as the familiar front end, however the Kiger is much more premium and appealing with sharper edges and a sporty demeanour.

The high seat in the cabin gives a proper SUV driving position and a commanding view of the road ahead. The instrument cluster is futuristic and takes some time getting used to. The front seats are supportive and ingress and egress are easy with its wide doors.

The infotainment screen has good resolution and Android Auto / Apple CarPlay works very well. The 1.0 litre turbocharged petrol engine offers great pulling power although it is not the most refined unit you can get. The turbo whistle is quite nice to hear while the fuel efficiency is decent at 12.5 kmpl.

The Kiger performs equally well as a city runabout and as a highway cruiser.

The Nissan Magnite shares the same engine with the Renault Kiger and has good potential for everyday use. Around town, it performs very well and is responsive above 2000 rpm. Coupled with the CVT gearbox, the drivetrain’s overall refinement levels are superb. The rubber band effect of CVTs is hardly felt in the Magnite as long as you are not overzealous with the throttle.

With the interior, it seems as if Nissan hasn't thought about convenience very much. For example, the Sport mode button is placed on the gear lever instead of on the dash or beside the stick shifter. It's not even marked, which may get pressed by accident sometimes.

Still the Magnite is an excellent crossover, with a good performing engine / transmission while the cabin is comfortable.

The Kia Sonet is the most feature rich compact SUV you can find. Ventilated front seats, a 10.25 inch touchscreen, Bose surround sound system, LED headlamps, remote engine start and front parking sensors, the list goes on. The Sonet is also well acquainted with city driving and is a breeze through traffic. If only the rear seats were a bit more spacious, and the ride quality were improved, the Sonet could be a well-rounded package.

The engine and gearbox give the driver a big car feel in what is a compact SUV. The diesel engine is a little noisy when revved hard though, but you can feel its ample power delivery without straining itself. There are driving modes such as comfort and eco, while the infotainment screen is easy to use and large enough to make you feel special.

Let’s have a look at some of the advantages and disadvantages of owning these compact SUVs.

The Kia Sonet gets excellent styling that has a touch of modern design, along with contemporary looks. It is also sort of muscular and rugged to look at

The Kiger and Magnite share a lot more than just their price tag. Being built on the same platform means they are also similar to drive and have comparable ride/handling dynamics. The Kia Sonet pulls a little ahead here in terms of engine refinement, features, and slightly more premium interiors.

The Sonet is more polished than the Magnite and the Kiger, but it has a higher price tag for all those extra features that make it the more sophisticated compact SUV. The Renault Kiger does however tick all the right boxes that matter the most and would be a good choice for the price-conscious buyer.

The value offered by the Renault-Nissan alliance is something you can’t overlook. The Renault Kiger and Nissan Magnite both debuted in India as brand-new compact SUVs, with modern styling, a decent feature list for the price you pay, and performance-happy engines that include turbocharged versions.

The Nissan Magnite comes across as a compact SUV with lots of potentials, not only with its potent engine options but also the fact that it is a great upgrade for those who want to move from a hatchback to a compact SUV. If only Nissan could widen its service centers and dealership network, the Magnite would be a sure winner for Nissan.

What Is Tire Regrooving? Know Its Advantages