What is a car fuse and how does it work? 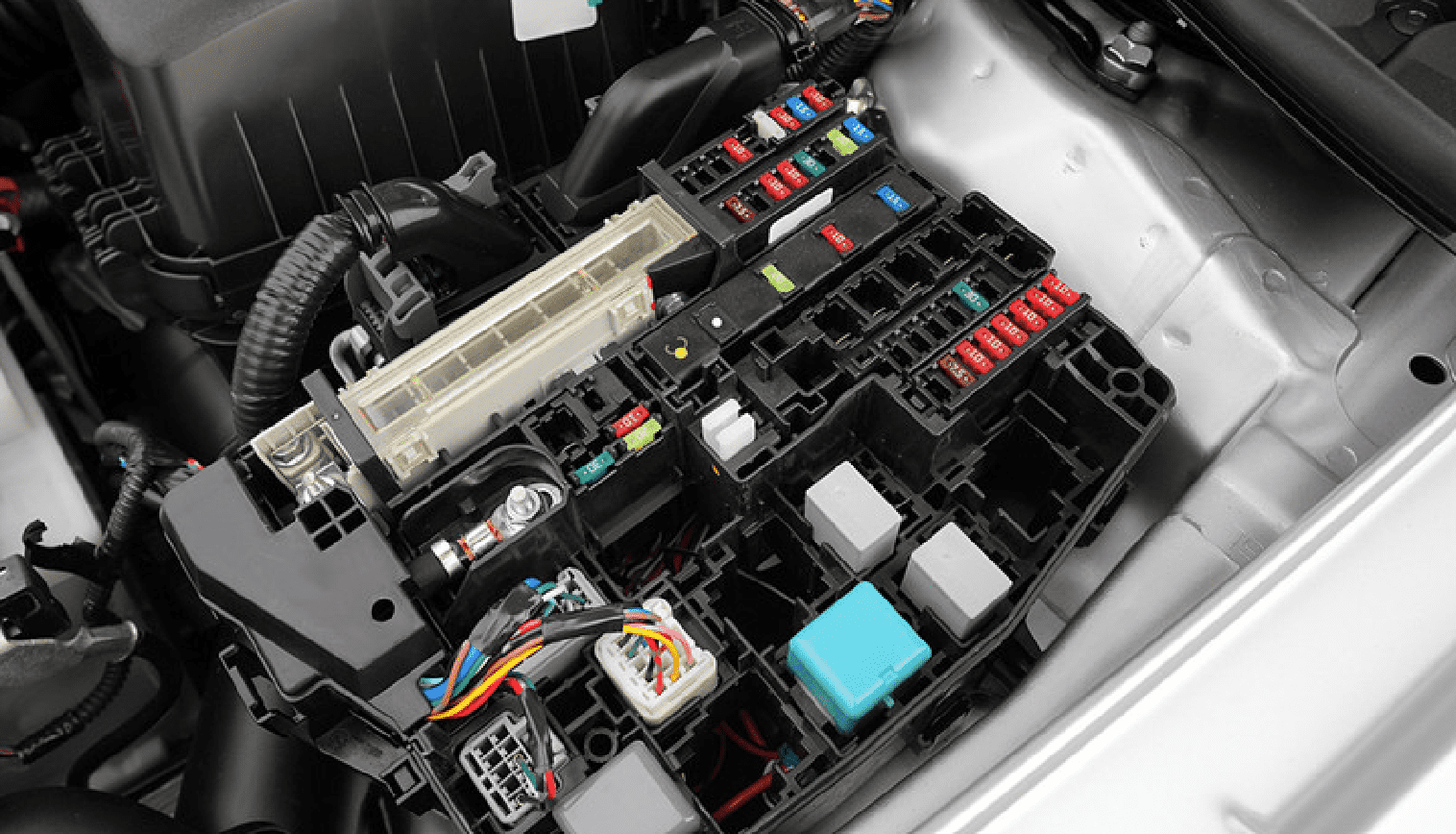 A car fuse is a component that is designed to protect electrical systems in cars. If a fuse detects a particularly dangerous level of current, the fuse disconnects the circuit, thereby offering protection against overcurrent and short circuiting. Commonly they are known as automotive fuses. The various types and sizes available are best suited to different electrical applications in vehicle electrical systems.

Modern car fuses are blade-type fuses. They are characterised by a certain body colour and two metal prongs that fit into the socket. Depending on the application, they can be mounted onto fuse clips, fuse blocks or fuse holders.

How to check a car fuse?

Car fuses are for single-use and should not be replaced unless they are blown. Therefore, regular maintenance is not called for and a simple visual check can determine if the fuse is in good working order or not. When a fuse is broken or blown, it is quite easy to see that the connection has been broken or the wire has melted.

If a visual inspection is not possible or further confirmation of the fuse condition is necessary, a multimeter can be used to check the fuse. This can be done in one of two ways:

Set the multimeter in continuity mode and attach the probes to either end of the fuse. The device will then start to detect if there is continuity within the fuse. If the multimeter displays a large resistance or shows an error message, then the fuse has probably blown and will need replacement.

The second method is to use the ohmmeter mode of the multimeter. This is used to check the resistance of the fuse. The fuse should be removed from its holder at this point. Place the probes at either end of the fuse. A low reading that is close to zero indicates that the fuse is working as expected and there is continuity in the fuse. On the other hand, a high reading of the resistance value will indicate that there is a problem with the fuse.

What happens when a car fuse is blown?

When a car fuse is blown, one or more of the electrical components within a vehicle will stop functioning. First, one must determine where the fuse box is located. Some vehicles may have more than one fuse box, and each model / manufacturer will have different locations for the fuse box. The user manual is the best place to help find the location of the fuse box that relates to the particular electrical component that has stopped working.

Next, we must find the required fuse from the fuse box. The fuse box will usually have a diagram on its cover to help find the right fuse for the particular electrical component. At this point you can double-check all the fuses if the vehicle is experiencing an electrical issue.

What are the different kinds of fuses?

Automotive fuses come in multiple types. Different types and sizes will be required for the varying electrical equipment onboard a vehicle. It is quite common for one car to have different types of fuses.

The type of fuse will depend upon a series of factors. Included in these factors is the make and model of the vehicle, the existing fuse, the electrical circuit and the electrical equipment it is designed to protect.

Automotive fuses are often inexpensive and easy to replace. However, it is important to choose the right kind of fuse for the application to prevent electrical issues and to ensure the electrical equipment is kept safe. Various types of blade fuses vary by size, and generally a larger fuse is used for a higher current application. Therefore, you must ensure that you select a fuse with the correct current rating.

How is a car fuse replaced?

First, you must find the fuse box and the faulty fuse, then you have to buy a new fuse of the same type, size and current rating. The new fuse must carefully be placed in the correct socket after removing the blown fuse.

The exact method of replacing the new fuse in the fuse box may vary from model and manufacturer, so it is wise to refer to the owner’s manual for the exact procedure. After replacing the fuse, have a look at the electrical equipment in question and check if it is working properly. If the equipment is still not working after replacing the fuse or the fuse continues to blow then this may be an indication of a more serious electrical problem. At this point an electrician for vehicles should be consulted to solve the issue. Note, you should never replace the fuse with one that has a higher ampere rating.

Step by step guide to replace the fuse

Various sizes and colours denote the characteristics of each fuse. It should be noted that not all sizes are designed to work with all ampere ratings.

There are six kinds of blade type fuses available.

Micro2 – The smallest type of fuse, characterised by its long slender shape.

Micro3 – These types of fuses have three terminals instead of two.

Low profile mini – small and compact fuse with the terminals not extending much beyond the body.

Mini – These feature the same body type as low-profile fuses but the terminals are much longer.

Regular –These are the standard type of fuses and also the second largest.

Maxi –Designed for high current application, these are the largest type of fuses.

Q1. Why does the fuse keep blowing when replaced?

Ans. A blown fuse protects electrical equipment from over current and short circuiting. Fuses blow normally, however, once a fuse blows, it will require replacement by a similar kind of fuse. If the fuse keeps blowing, it indicates a more serious electrical problem that should be looked into by a vehicle mechanic.

Q2. How to replace a car fuse?

Ans. First, one must determine which fuse has blown. Locate the fuse box to determine which fuse relates to the particular electrical equipment that has failed. Visually inspect the fuse for a broken connection or melted wire. Purchase a new fuse of the same type, size and current rating. Remove the old fuse and gently insert the new fuse in its place making sure not to damage the sensitive terminals. Replace the fuse box cover or panel. Test the new fuse and check if the electrical equipment in question is working correctly.

Q3. What causes the fuse to spark when replacing it?

Ans. Remove the fuse from its holder. One may require a small screw driver to unscrew the fuse holder cover. Visually inspect the fuse. If there is a large gap in the wire or if the wire has melted and smeared the inside of the glass or plastic body, it means that the fuse is blown and needs replacement.

Ans. If a fuse is working intermittently, replacing it will not solve the problem. A new fuse replacement may let the electrical component work temporarily, but unless the underlying cause of the disruption in electrical current is solved, the fuse won’t work for long and blow again.

Q6. How many amperes fuse does a car stereo need?

Q7. How to test the car fuse with a multimeter?

Ans. Set the multimeter in continuity mode and attach the probes to the fuse terminals. This is an electrical test to determine if there is continuity between the terminals of the fuse. If the multimeter shows a large resistance, then the fuse is not connected and is most probably blown. The fuse will have to be replaced with a similar fuse of the same size, type and current rating.

Q8. What causes a car fuse to keep blowing?

Q9. How to remove a car fuse with a tool?

Ans. Depending on the type of fuse, they may be small and delicate. Removing the fuse without damaging the nearby fuses or the fuse itself would be challenging. A fuse puller is a tool that can be used to make the process of removing a fuse much easier. This tool will help you remove the fuse quickly and cleanly.

Q10. Where is the fuse box located?

Ans. Finding the fuse box that contains the defective fuse can be difficult. It is best to refer to the owner’s manual to determine the exact location of the fuse box relating to the electrical equipment in question. Some vehicles will have more than one fuse box. And the location will vary depending on model and manufacturer.

Q12. What is the difference between ATC and ATO fuses?

Ans. ATC and ATO fuses are almost the same. The C in ATC stands for closed which indicates that the element is closed within the plastic housing. The O in ATO stands for open which means the element is open and subject to the environment.

Automotive fuses are found extensively in all vehicles such as cars, trucks, buses and offroad vehicles. The main purpose of a fuse is to protect the electrical equipment on board the vehicle. Cables, wires and electrical components are protected from over current and short circuit conditions. Fuses are inexpensive components and can easily be replaced. Without fuses, electrical equipment can get damaged in a certain situation of surge in electrical current.

What is power steering fluid and what does it do?

Confused About Which Tyre to Buy for Your Car? Read This!!!