What is a differential? How does your car turn around a corner without making any wheel slip? 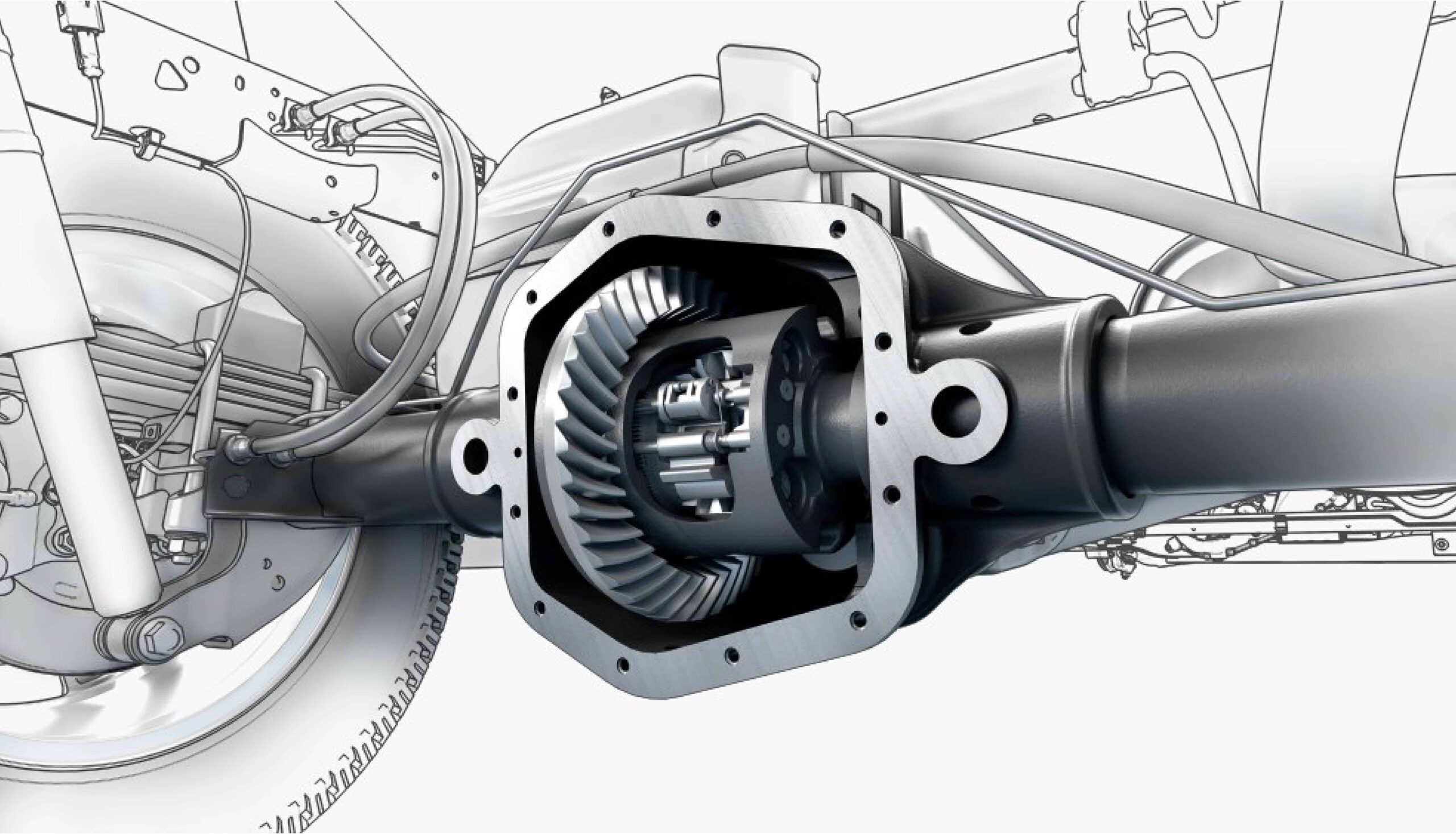 Differential is an inevitable system in all four wheelers. A differential is responsible for turning different drive wheels at different rpm when needed. This need arises when the vehicle is taking a turn. During a turn, the outer side wheel needs to travel farther and faster to cover the distance in the same amount of time than the inside wheel. Differential serves this purpose.

In the old days, vehicles could turn easily as they had engine output power to only one wheel. But, this used to put an enormous pressure on the wheel and the vehicle was difficult to drive out of snow or mud where the drive wheel lost traction. In this way, the one wheel drive was soon out of the game and two wheel drive needed to be introduced.

The differential has a set of bevel gears which can rotate independently of each other.

How does a differential work?

Let us understand how a typical differential works, in simple terms. We will consider a rear wheel drive system for this purpose.

Two rear wheels are connected in different axles so that they can rotate independently.

When a vehicle is being driven straight, the pinion gears are stationary. The engine drives the wheels through driving pinions and so both the wheels rotate at the same speed.

During turning the car around the corner, the planet pinion also starts rotating on its own axes so one each wheel gets different speeds.

There is an additional problem which this system faces. It is when one wheel loses traction.

In this simple setup, if one wheel is on a different surface for example, sand or ice and loses traction then it will continue spinning excessively and the other wheel will not get enough power to drive out the car from this situation. The car will be stuck. This happens because the differential system works on resistance. They deliver power to the less resistance wheel and so the less resistance wheel which has lost traction gets most of the power and the other wheel doesn’t get much. For this, the differential had to be locked.

To cope up with this con, a different working system has been developed. Let us see how that newer technology works. It is called the limited slip differential or locked differential. As they work by limiting the slip and transferring that power to the wheel which has more traction.

In a limited slip differential, clutch based differential is the most popular and so is worth discussing. Clutch based differentials can prevent slip even before it starts. This setup has carbon disc clutch packs and central spring assembly between them. This is located behind each differential gear.When one wheel loses traction and starts to slip, the torque input changes. This hardens the springs and the clutch force increases which transfers the power to the other wheel.

Where is the differential located in a car?

In front wheel drive cars or fwd, the differential is located along the transmission system inside an unit called a transaxle.

A differential can be of the following types:

Among differentials, this is the simplest and most widely used. In this setup, each wheel can spin independently. The biggest downside of this setup is that if a wheel loses traction, for example falls on ice, the wheel will spin excessively and will take you nowhere.

To counter this downside, modern vehicles are equipped with traction control. This uses sensors to determine if a wheel is spinning faster and control it by braking the wheel or reducing the engine power. In mud or deep snow, excessive spin in the wheels are needed and in those cases, traction control can be disabled with the ease of a button.

High performance cars use this model of differential instead of the simpler open one. In this model, when a wheel loses traction and starts spinning excessively then the power is distributed to the other wheel. In fwd cars, this also reduces the tendency of cars to go sideways when throttle is increased.

Boost around the corners

Differentials are built in for boosting the car in a corner. So, all differentials will boost you around the corner but with varying efficiency. A vehicle with torque vectoring does this job better. They push the outside wheel with more power which results in a tighter turn and reduces understeer.

Another advanced setup is electronic torque-vectoring differential. This uses sensors and when turning, applies brake to the inside wheel and results in a tighter turn as the vehicle steers towards the slow spinning wheel. More power is also sent to the outside wheel. This improves the overall handling of the vehicle but is costlier than other differentials so can be found on top sports models.

In addition to locked differentials, an all wheel drive vehicle will also have a center differential which ensures proper distribution of power to any axles which need it.

Generally, an awd receives power to the front axle only from the center differential. But if these wheels start to slip, then power will be distributed to the rear wheels too.

The Torsen differential gets its name from Tor= torque Sen= sensing. This produces the same effect as a limited slip differential but with a more clever approach without the use of clutch or fluid resistance.

In this differential setup, necessary resistance is activated by a layer of worm gears which sits over the differential gear. This setup has the added benefit of immediate torque transfer due to the constant mesh system between the gears. This results in better handling capabilities of the vehicle.

The gears can be made in such a way that a different ratio of resistance comes into effect while accelerating and decelerating.

No perishable part is part of this system and so needs no maintenance or replacement. It also achieves the functions of previously mentioned differentials so, is superior.

The active differential can electronically alter the mechanical forces artificially and so is programmable. It is programmable and a series of sensors can be fitted with a computer to make this automated so that the differential works automatically in various driving conditions. Now we can program which wheels to deliver power to and when. This drastically improves driveability on imperfect roads and is used by rally drivers whose cars are subjected to continuously changing driving conditions.

Caring for the differentials

There is a small caring needed for some differentials. Differentials have a fluid called the differential fluid for it to work smoothly. Over time, this gets contaminated and dirty. We need to replace this fluid to avoid damage to the differential. This is also known as gear oil or transaxle oil. Change this oil at around 30 to 50 thousand miles or 50 to 80 thousand kilometers.

Every system has its own advantages and disadvantages which suit various needs. A locked differential system is not needed in your car if you just drive up to the local supermarket. It will be better suited if you cross rural roads frequently or are an adventure loving person who likes off-roading.

In this blog we have gathered knowledge about various differentials and these may help you make a better decision on the type of car you should purchase for yourself by looking at the differential they come with.

What does the odometer and speedometer of an automobile measure?