What is the difference between a strut and a shock absorber? 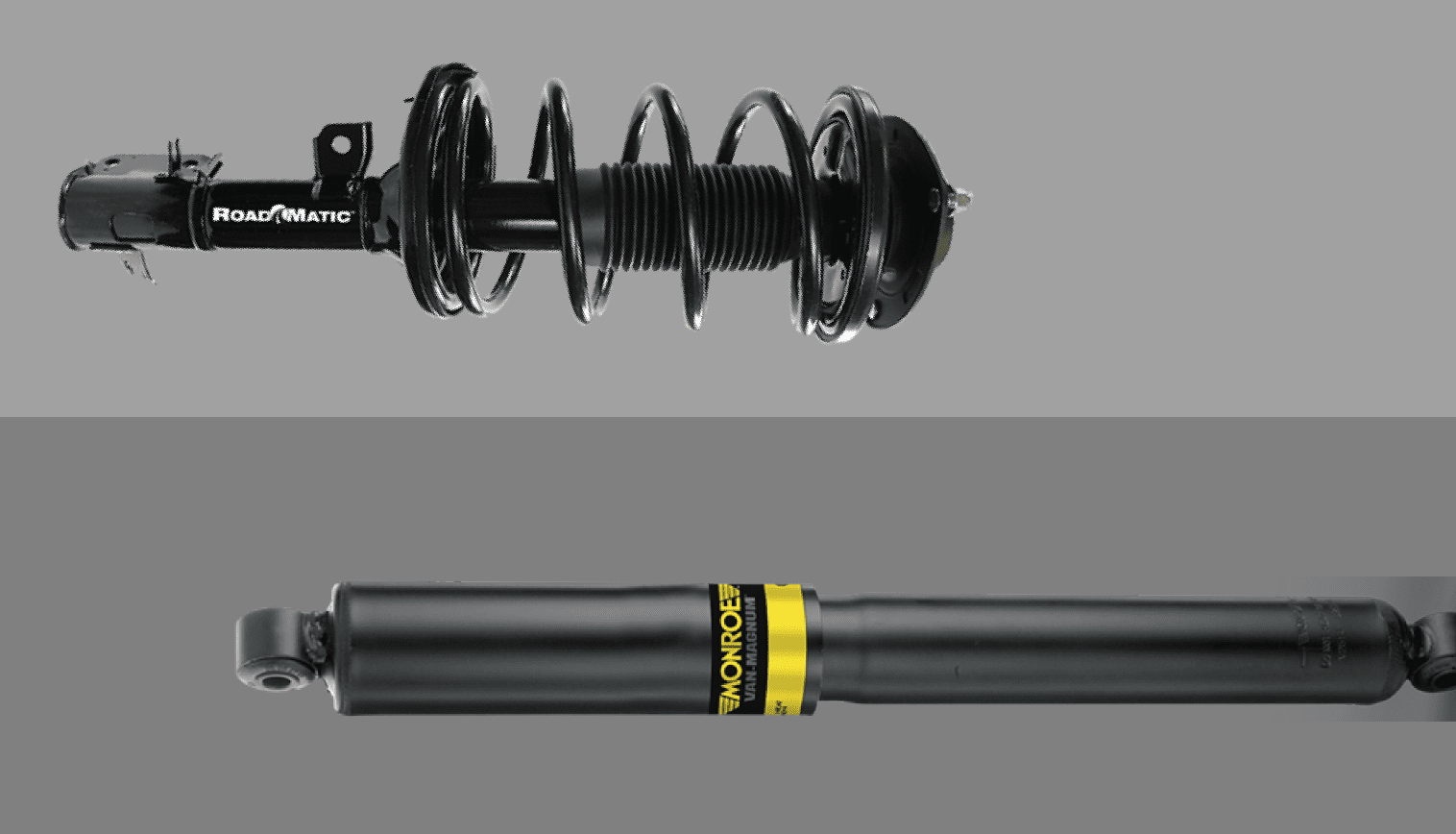 The suspension system is an integral part of a car because it absorbs inundations on the road like potholes and speed breakers. Road surfaces are rarely smooth so struts and shocks are required for a smooth ride and to maintain control of the car.

People usually confuse the terms “shock absorber” and “strut”, however, they are separate components with different functions. Shocks and struts both help keep the tire of the car in contact with the surface. Otherwise, steering, handling and braking can be affected. The suspension system of a car helps reduce sway and body roll around corners, and it helps maintain wheel alignment reducing unnecessary tire wear.

What is a shock absorber?

Components of a shock absorber

Displacement of hydraulic fluid within the shock absorber provides the necessary resistance. A piston is attached to the end of a piston rod and receives resistance from the oil in the pressure tube. As the suspension moves up and down, the piston resists this movement to provide a smooth ride and to keep the vehicle’s wheel in contact with the road.

Shock absorbers are usually made of steel as it has higher elasticity. The main components of a shock absorber are the mounting, bush, piston and piston rod, cylinder and bolts. The mounting helps secure the shocks to the vehicle body and suspension. The bush is found on the mounting and is usually made of rubber or polyurethane. The bushes are responsible for absorbing vibrations and reducing noise and wear. The pistons contain openings or valves that allow it to move against the hydraulic fluid. The cylinder acts as the body of the shock absorber and contains the hydraulic fluid and the piston which moves inside it. Bolts fasten the shock absorber to the vehicle's body at one end and the vehicle's suspension system at the other end. In addition, the shock absorber will have oil seals that prevent the oil from inside the cylinder leaking out, and also keeps dust and contamination from entering the tube.

In vehicles, shock absorbers even out the effects of rough roads, leading to a comfortable driving experience. Both ride quality and handling are improved with the use of shock absorbers.

What is a strut?

Struts also perform a second job. Unlike shock absorbers, struts provide structural support for the suspension, support for the spring and hold the tire in an aligned position. They also bear the side load placed upon the suspension. Struts are responsible for the ride comfort, steering, vehicle control, braking, wheel alignment and wear upon other suspension parts.

A strut consists of a strut housing to provide a rigid structural support for the suspension assembly and a damping unit within the housing to control the spring and suspension movement. The bottom of the strut body attaches to the steering knuckle which is connected to the lower arm through a lower ball joint. Altogether, it is the strut assembly, with a damping unit utilising a coil spring to support the vehicle's weight. Every wheel has either a shock absorber or a strut. Vehicles may have struts in the front and shocks at the back or any configuration of the two. Each wheel has some sort of ride control for the smooth running of the vehicle.

MacPherson struts are the most popular independent suspension system used on passenger cars today. Most vehicles make use of this system in the front and use simple coil springs at the rear. The MacPherson system uses a damper assembly/ shock absorber and a simple coil spring assembly. The spring serves the purpose of absorbing bumps in the road. The damper uses hydraulic fluid to disperse this energy in heat form. This system together provides a smooth ride for the occupants of the car.

The advantages of the MacPherson strut system are that it allows ample space for the drive shaft to be located. It has a low cost and is easy to maintain. The system is reliable due to a small number of parts and it is very lightweight. The disadvantages of this kind of system are that it requires a monocoque chassis design and it is unsuitable for off road applications due to its limited movement.

The struts of the MacPherson suspension do a good job of keeping the vehicle flat over bumpy roads. They don’t take up much room allowing more cabin space for the passengers. The lighter weight allows better acceleration and speeds.

It offers great handling and stability as it allows the tires to be in contact with the road surface. The overall set up is quite compact and flexible allowing for other components to be located in its vicinity. Off roading becomes easy because of long suspension travel.

However, this system is costly and complex which is why it is not featured on many cars. It involves a number of parts that are quite difficult to maintain. The purpose of a suspension system is to provide a cushion between the road and the car cabin. Both shock absorbers and struts are used in suspension systems to maintain a comfortable ride, good handling and steering of the vehicle.

1: What are the symptoms of a leaking shock absorber?

Ans. One of the most important signs that a shock absorber is worn out is when you see oil leaking from the oil seals. The top of the shock absorber has an oil seal that can get damaged and oil leaks out over time. In this case the shock absorber will have to be replaced, and if one goes, the rest will follow shortly, so it is better to replace all four at once. A single replacement can make the car handling worse.

2: Why are shock absorbers used in vehicles?

Ans. Shock absorbers even out road defects and keep the tires in contact with the ground for maximum handling. They are critical for safety and protect the car from damage while giving the occupants a smooth ride. If you are looking for a smooth driving experience, then shock absorbers play a vital role and it is important they remain in good condition to perform at their best.

3: Can shock absorbers be repaired?

Ans. Not all shock absorber problems can be repaired. Parts that can be replaced are the mounts, bushes, piston and hydraulic fluid along with oil seals. If the vehicle has covered considerable mileage, then it is advisable to replace the shock absorber.

4: Where should shock absorbers be replaced?

Ans. Shock absorbers should be replaced at an authorised service station, because an inadequate job may be dangerous if failure occurs at high speed. Or if a sub-standard part has been replaced, it may not last as long as an original part.

5: When should you replace a shock absorber?

Ans. If your car bounces too much over bumpy roads, and it is difficult to steer the vehicle, it may be time to have your shock absorbers checked for replacement. Another sign that shock absorbers need attention is uneven tire wear, excessive body roll or extensive dive when braking.

6: How many shock absorbers does a car have?

Ans. Cars have 4 shock absorbers, one at each wheel. Shock absorbers don’t usually require maintenance like other parts of the car, but they will eventually require service or replacement during their lifetime.

7: How much do shock absorbers cost?

8: Which shock absorbers are best?

Ans. Some of the popular brands of shock absorbers are Monroe, KYB, Bilstein, Gabriel and Koni. It is best to replace a shock absorber with the same brand and specifications of the manufacturer for a comfortable driving experience.

9: How can shock absorbers be checked?

Ans. One way to check shock absorbers is to push down on one of the corners of a car and see if there is excessive bounce on releasing the pressure. A good shock absorber should stop bouncing right away. The shock absorber can also be visually inspected to check for oil leaks or damage.

10: How much travel do shock absorbers have?

Ans. Shock absorbers usually have around 2.5 inches of travel in both directions. The amount of shock absorber travel depends on the type of suspension you are dealing with. Off road vehicles often require a shock absorber with increased travel.

Ans. If you hear squeaks every time you hit a bump on the road, the squeak is likely coming from the shock itself, or it could be a sign of a worn ball joint or bushing.

Ans. Shock absorbers form an integral part of the suspension system and provide the occupants with a smooth ride. They also help in steering control, reduce body roll, braking and in acceleration. Shock absorbers allow the wheel to be in contact with the road even over uneven surfaces.

14: Will shock absorbers work upside down?

15: Can shock absorbers be adjusted?

Ans. Adjustable shock absorbers can offer adjustments in travel and rebound. In vehicles with too much body roll, the suspension can be set up to be a little stiffer. This will improve handling of the car.

All You Need To Know About Central Locking System + FAQ’s