Back To Basics: What You Need To Know About V Belts In Cars. 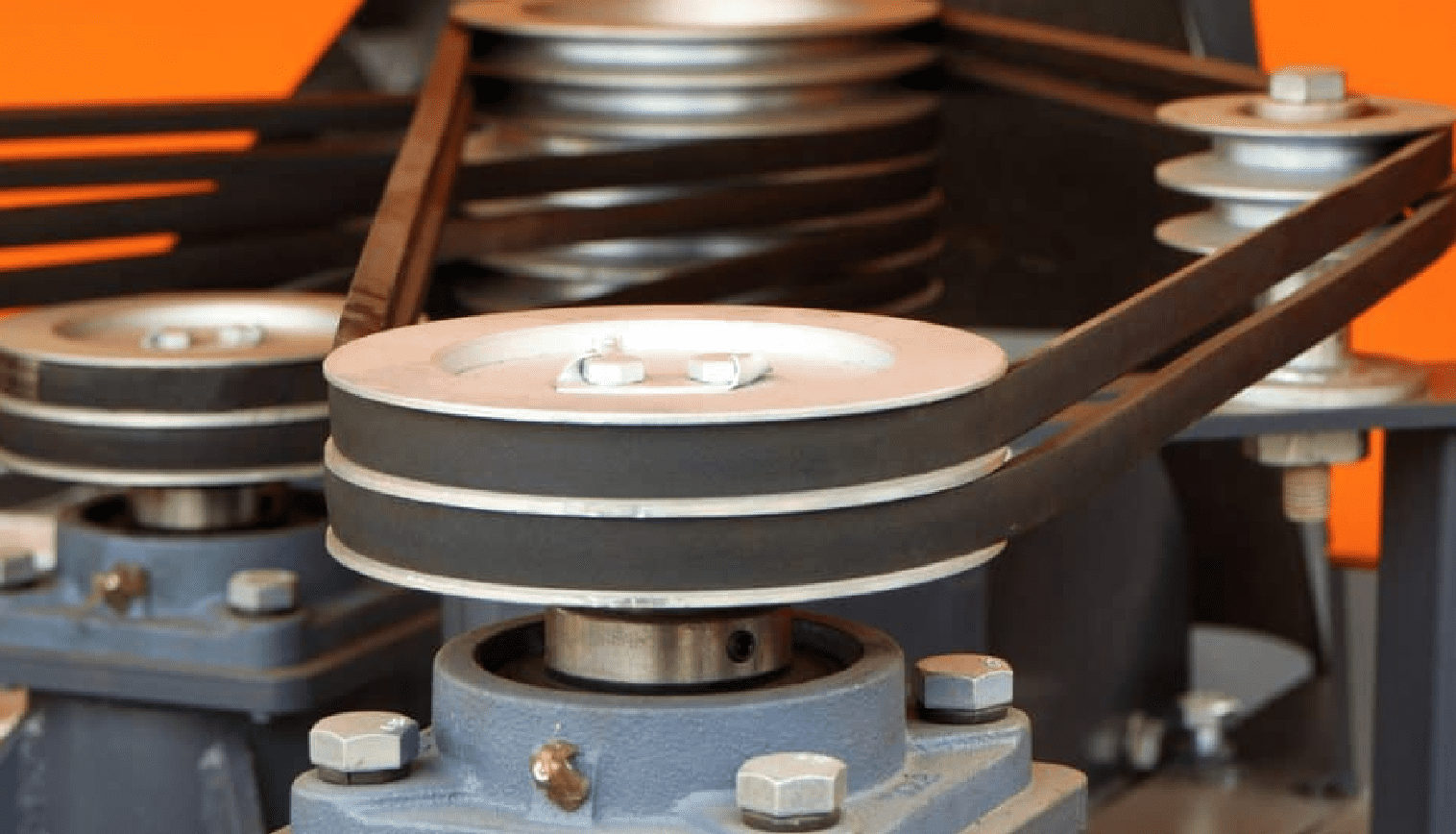 Why are they called V- belts?

The name V belt is derived from the belt's shape, which is approximately trapezoidal, like a “V”. Formerly, flat belts were used, but V belts replaced them for their superior performance. V belts have a wedge type of shape, and are used in power transmission. They have a high load pulling capacity and the torque tension is reduced.  V belts are made from urethane, neoprene or rubber.

What are the common V belt problems?

V belts are low on maintenance and high on efficiency. They can be used for mid to high power transmission in vehicles. But what are the main causes of V belt failure? How do you get the most out of your V belt? By examining the v belt, you can check for failure symptoms and replace belts before they fail.

V belt sidewall wear is most often caused by worn or damaged pulleys. There could also be a number of other reasons why V belt sidewalls get worn. It could be because of intense heat, belts that have excess oil or grease on them, moisture and weathering elements.

Back wear on the V belt is common when the belt is forced on the pulley and there is some slack in the belt which is causing undue vibration against the idler. Worn out idlers are sometimes the cause of this problem.

Ensure that the belts have the correct amount of tension when they are installed. Belts that are fitting fine, should be repositioned 24-48 hours after installation for proper functioning.

When V belts are exposed to excess oil and grease, they tend to soften and swell. If this happens, the V belts will not fit the pulleys properly.

This often happens when the belts are working in extreme environments with intense exposure to oils and grease. Using a belt guard can prevent this sort of problem. Avoid using any kind of belt dressing as it may exacerbate the issue. If oil and grease still make their way to the belt, consider using a V belt made from composite materials as they are not affected by oil, grease, moisture and engine fluids.

This sort of problem occurs from worn out pulleys or ones that are damaged. Improper tensioning of the V belts may cause them to slip and squeal, and finally lead to failure. Slipping can also be caused by using the wrong cross section type of belt or by the exposure to excess amounts of oil and grease.

The best way to avoid squealing and spinning v belts is to maintain the correct tension between pulleys, and by using new pulleys when they get worn out or damaged.

V belts can be damaged by forcing a belt over a pulley or having decreased or increased tension between pulleys. In this case the v belt covers split and get damaged.

Cracking on the underside of belt

Cracks on the V belt can be serious because in time they will reduce in efficiency before finally failing. Excessive heat is generally the major cause of V belts cracking. Misaligned or wrong sizes of pulleys and idlers can also cause cracking of the V belts.

A solution to this problem is to use hardened rubber V belts as they can cope with extreme heat without cracking.

The belt should be changed immediately when it has missing cogs or teeth, because the belt will slip and eventually fail in time. Missing cogs or teeth can be caused by excessive levels of heat, pulleys that are too small or misaligned or improper storage of V belts.

It would be a good idea to consider a V belt material that is well suited to extreme temperatures. Aligning the pulleys very precisely should also help alleviate the problem.

Bushes that crack may cause the pulleys to detach from their shaft after excessive use. The bushes usually crack after use of overly tensioned drive belts or from worn out or damaged pulleys.

The use of a belt tension gauge can help you decide if the v belts are over or under tensioned. This should prevent unnecessary bush damage.

What are multi V belts?

Multi V belts are also known as multi-ribbed V belts and have multiple grooves on their surface in contact with the pulley. They are thinner and more sleek than normal V belts. As a result, multi V belts take up less space, produce less heat and are more flexible than regular V belts. Multi-ribbed V belts also offer more grip so that there is less chance of stoppage.

The disadvantage of multi V belts is that multiple belts are needed to run groups of engine accessories as opposed to a serpentine belt where only one belt would suffice.

How is a V belt different from a wedge belt?

On first impressions, a V belt and a wedge belt look quite similar, but on closer inspection you can see that they are different.

V belts have a V cross section and fit perfectly into a V shaped pulley. This kind of design helps the belt drive the pulley without any slippage. The different types of V belts available are banded, cogged and wrapped.

V belts have the advantage of low noise operation and can be used in car engines to run ancillary accessories in a smooth operating environment.

The wedge shape of these belts provides a higher amount of support than traditional V belts. As a result, a smaller number of belts are required during load transmission. The drive becomes more compact and lighter.

V belts are essential in cars because they transmit power from one component to another. They can be made from rubber, urethane or neoprene in order to withstand extreme heat of the engine, and elements of the weather. The V belt is used to drive the alternator, Ac compressor, power steering components, and hydraulic water pump.

The reason V belts are so called is because of their cross section which approximately V shaped. As with all types of power transmission belts, V belts get worn out over time and have to be replaced.

If the V belt develops cracks, or the material starts peeling off, then it is best to replace the V belt. By doing so you can avoid serious engine damage.

Ans. If the V belt is properly tensioned it will not have more than half an inch of slack. The V belt can be adjusted using the adjusting bolt. Finally, tighten the mounting bolt with a ratchet and socket.

Q2. How far should a V belt sit in a pulley?

Q3. How do you install an adjustable V belt?

Ans. First check for wear and tear on the pulleys. The pulley should be free from oil, dirt and grease. The pulley should also be aligned correctly. Ensure that the V belt is in good condition and of the correct type for the application. Slip the belts onto the drive without stretching or forcing them on. The drive units should be brought together so that the belt can be slipped on. Adjust the centre distance between the pulleys to achieve the right tension in the belt. Allow about half an inch of slack in the belt.

Q4. Which way do you install a link belt?

Q5. When should a v-belt pulley be changed?

Ans. V belt idler pulleys wear out over time, eventually leading to failure of the pulley. Pulleys usually last 50,000 – 100,000 kms before needing a replacement. Replacement of the pulley usually is done along with the V belt replacement.

Ans. Accu-Link belts were designed as an alternative to regular V belts. Accu-Link belts were an easy to install, versatile and durable replacement when V belts break. They have easy installation, high power rate, resistant to harsh conditions, quiet and smooth and can withstand high temperatures. They can also handle pulley misalignment better than standard V belts.

Ans. V belts are used to connect two drive systems via pulleys connected to shafts. While the pulleys are rotating, the V belt must remain flexible enough to transmit the torque without slipping or breaking. Therefore there is a certain amount of stretch and expansion in the belts.

Ans. A cogged V belt has slots in it that run perpendicular to the length of the belt. The cogs or teeth in the belt reduce the bending resistance. V belts can be replaced with appropriately rated cogged belts. Cogged belts run cooler, are more durable and have a higher efficiency than standard V belts.

Q9. What causes the V belt to keep twisting?

Ans. Misalignment of the pulleys that the V belt is driving is one of the most common causes of V belt twisting. It also causes the V belt to wear out and prematurely be replaced. The best solution is to use a new V belt and align the pulleys properly. Ensure that the pulley, pulley brackets and pulley shafts are not wobbling, broken or bent.

Q10. Why does my V belt keep slipping?