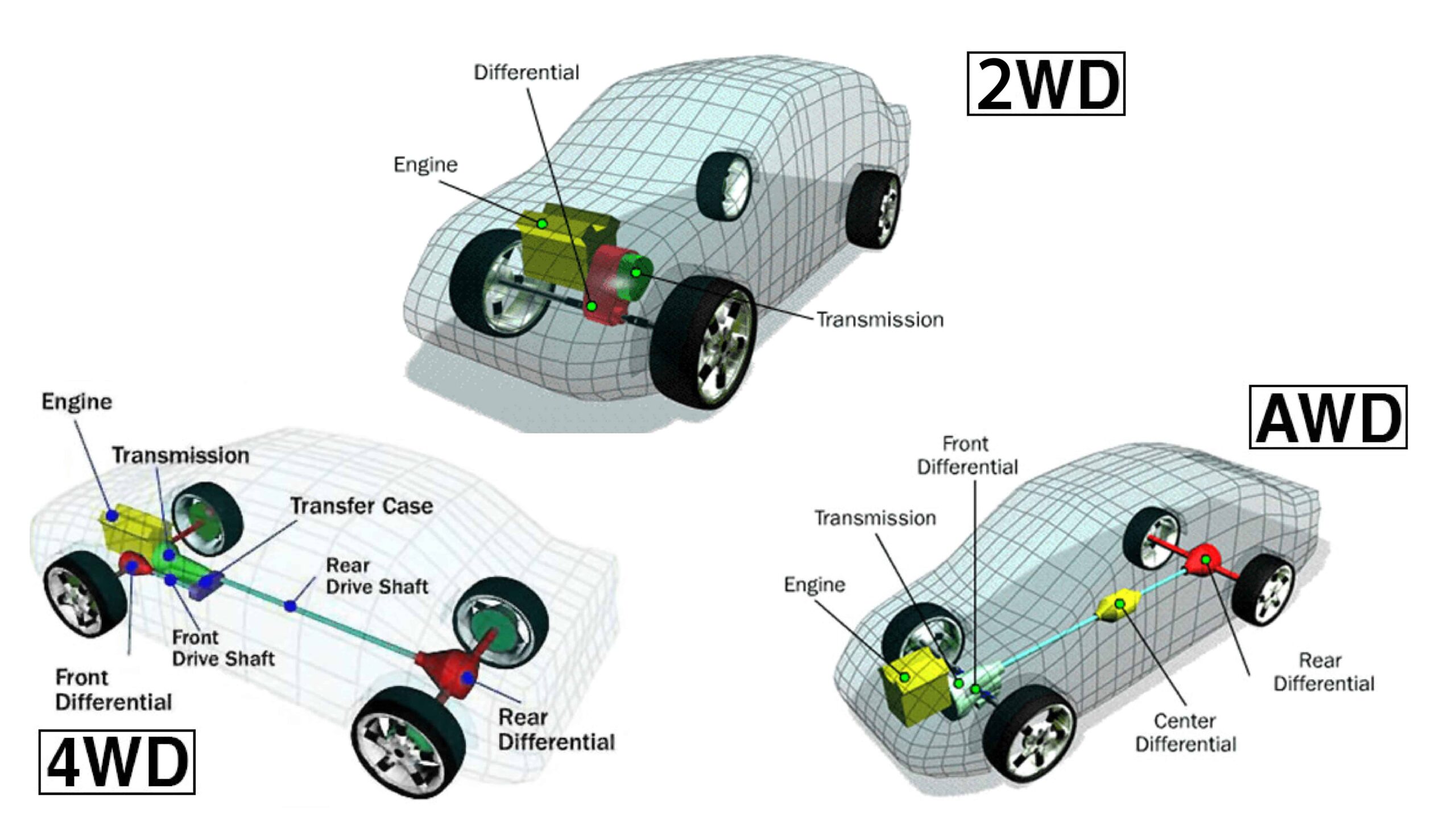 Is there any difference between a four wheel drive and an all wheel drive car? Let us find out. Many people have this question on their mind and some think both are the same. In this blog, we will also find out which would be a better choice for you.

At one point of time, we had only trucks and large sized SUVs which offered the option of a four wheel driven machine. But now, the advancement has touched the cars and we are in for a discussion regarding the benefits these mechanisms offer.

A 2WD instead, drives two wheels only. A 2WD can be Forward wheel drive (FWD) or Rear wheel drive (RWD). As the name suggests, in fwd cars, only the front wheels are driven by the engine. Whereas, in a rwd, the rear wheels are driven. Mainly, the differentiating feature of an AWD and 4WD to the 2WD is that the key operation is on one axle only.

A 2WD is sufficient in certain regions where there is less rainfall and no snowfall generally. These cars have less traction and will be sufficient if you live in a city with good roads. 2WD generates more fuel economy as this is a lighter system but 4WDs and AWDs have their own advantages which we will discuss now.

RWDs are found in more pricier cars and are more thrilling to drive as the feeling of the push from the engine is felt more in RWD cars than FWDs. In high performance cars, this system allows the car’s weight to be distributed more evenly. RWDs are also found in full-sized trucks and pickups. RWDs have lesser traction control so premium cars have started offering AWDs as the standard option.

Four wheel drives are not always on under normal conditions. Only the rear wheels drive the car forward and the front wheels just spin freely. With the control of a button the mechanism of four wheel drive can be activated. But the four wheel mechanism isn’t meant to be kept on all the time. So, you need to know when to activate it and when to turn it off.

Whenever the mechanism is activated, the total torque gets distributed and the front wheel now receives 50% torque and the rear wheels continue to receive the rest 50%. 4WD are found in trucks.

AN all wheel drive mechanism is always on. The torque distribution is controlled by a computer and adapts automatically to the road conditions. Here each of the wheels can gain traction independently. An AWD is generally for cars and SUVs.

When running down the highway, the system will transfer more power to the rear wheel for better mileage. But if the car is run on rain or snow then the system adapts and even power is distributed to all the four wheels to diminish the chances of wheel spin. This gives more grip to the car with the road.

In a normal 2WD or even the 4WD, power flows through the least resistance path i.e. it will naturally flow to the wheels which are spinning more and the car will not go forward in this case. You may face such situations where the wheel just spins on wet roads. So, an AWD is better in these scenarios.

So which one is a better choice for you?

What are the benefits of 4WD over an AWD?

A 4WD can be driven on rough and tough surfaces like rocks etc. It can maneuver easily when you are off-roading. It should be turned on only during such off-roading conditions,  at other normal conditions, it is of no use. That is to say, a 4WD is beneficial only if you look for adventure all the time which is not very common.

AWD over the 4WD?

An AWD is always on and is better for overall driving experience as it is useful for various weather conditions or general driving too. So, it is more useful for everyday driving and feels sporty.

Keeping the 4WD on during normal conditions is not wise as this mechanism doesn’t let the car do well in the corners  as the differential in a 4WD is not meant to drive all the wheels at the same speed.

Both the 4WD and AWD have less fuel efficiency as they are bulky systems. The 4WD is bulky and heavy so the car takes more fuel and the AWD because it is on all the time.

Overall, though fuel efficiency is compromised a bit, still an AWD is worth it as you will never have wheel slippages on roads again. 4WD is also worth it if you go on adventures very often. A 2WD is good if you look only for daily commuting to work with your car and your driving is limited to cities only where no snowfall happens. Now, you can make a better choice according to your needs and the purpose of this blog is served.

Automatic Transmission Car in India: The Effort of Shifting Gears Are Gone Now