Breaking Down the Complexities of 2-stroke and 4-stroke Engines 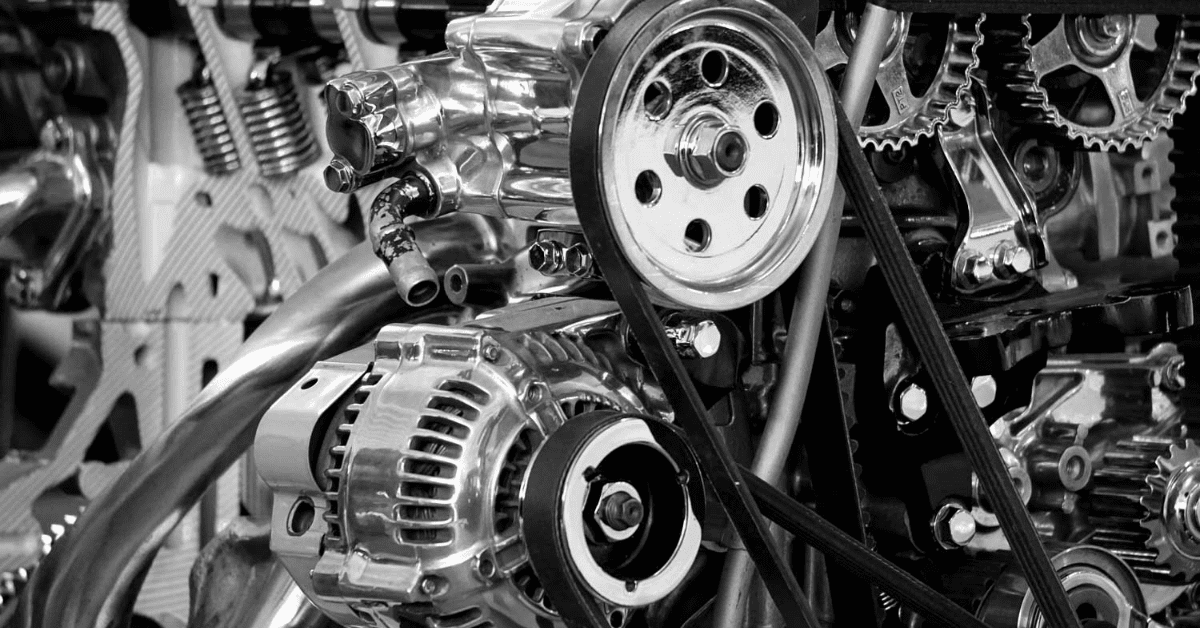 The engine is the most complex component and the heart of a car. Its purpose is to convert heat from burning petrol or diesel into power that moves the wheels and propels the vehicle into motion.
The engine contains a spark plug which is responsible for igniting the air fuel mixture inside the cylinder and setting the chain reaction into motion. Hence, we get the name internal combustion engine. (In the case of diesel engines, a spark plug is absent, instead it contains a fuel injection nozzle that sprays diesel into the combustion chamber which ignites due to the high temperatures caused by compressing the fuel).

The Piston in the Cylinder Undergoes 4 Distinct Stages (Known as Strokes) Namely:

Depending on how these strokes are managed in the engine, we can classify the engine as four stroke or two stroke.

How Can We Differentiate Between 2-stroke and 4-stroke Engines? 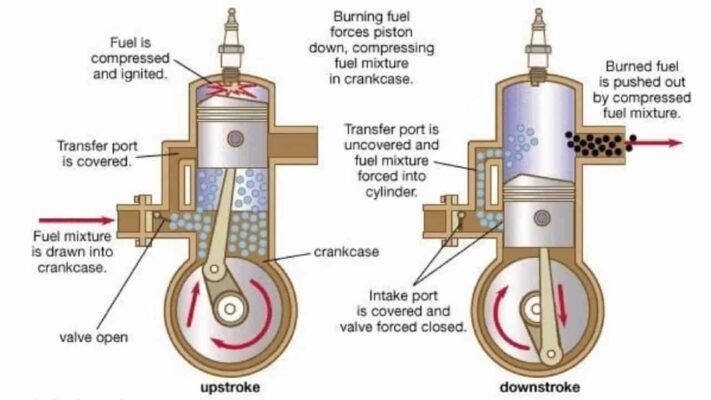 As technology and innovation have improved with internal combustion engines, what has remained is two distinct types of engines, i.e., the 2-stroke and the 4-stroke engine.
You may be asking what exactly is the difference between a 2-stroke and a 4-stroke engine? Read on to learn the major differences between the two types of engines.
The major distinction between a 2-stroke and a 4-stroke engine is that in a 4-stroke engine, the crankshaft undergoes 2 complete revolutions consisting of 4 strokes to complete one power stroke, whereas the 2-stroke engine goes through 1 complete revolution of the crankshaft consisting of 2 strokes to complete one power stroke.
A stroke is defined as the piston moving from its top most position to the bottom most position within the cylinder. When the piston moves down, it intakes the fuel air mixture, and when it moves up, it expels the exhaust gases. 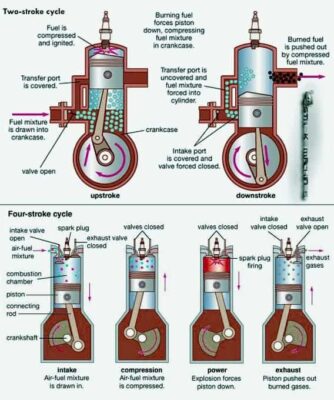 Let’s Break Down Each Stroke in the Combustion Cycle:

Intake stroke – the piston moves from top dead centre to bottom dead centre while allowing the fuel air mixture into the combustion chamber.

Compression stroke – the piston moves from bottom dead centre to top dead centre, the intake valve closes and the air fuel mixture is compressed in the combustion chamber 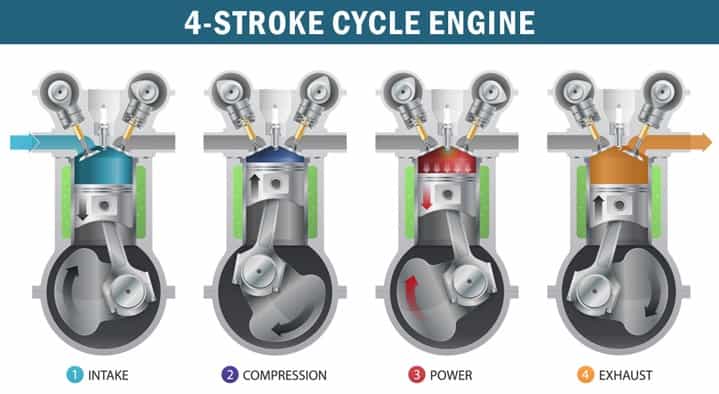 4 stroke engines are the most common type of engine and power everything from cars, to generators. These types of engines have valves for the intake and exhaust processes of the air fuel mixture.
Most engines today are 4-stroke engines because they are efficient, produce less pollution and keep the oil and fuel separated so that you don’t have to premix petrol and oil while refuelling.
4- stroke engines have a good balance of power, reliability and provide good fuel efficiency. Almost all passenger cars and trucks today have 4-stroke engines either petrol or diesel. 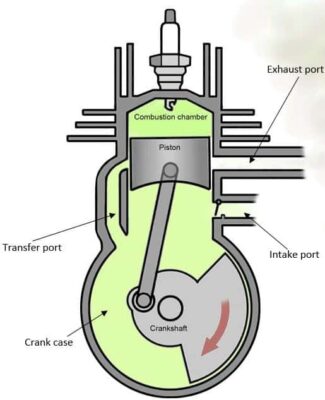 2-stroke engines are less common and do not power passenger cars and trucks. They are more suited to applications where a high power to weight ratio is required, like small capacity motorcycles, chainsaws and lawn mowers.
In 2 stroke engines, there are no valves present for the intake and exhaust strokes. Instead, they make use of inlet ports and exhaust ports that are uncovered by the moving piston.
These kinds of engines need oil to be mixed in with the petrol for lubrication of the piston as it moves.

Comparing a 2 Stroke and 4 Stroke Engine 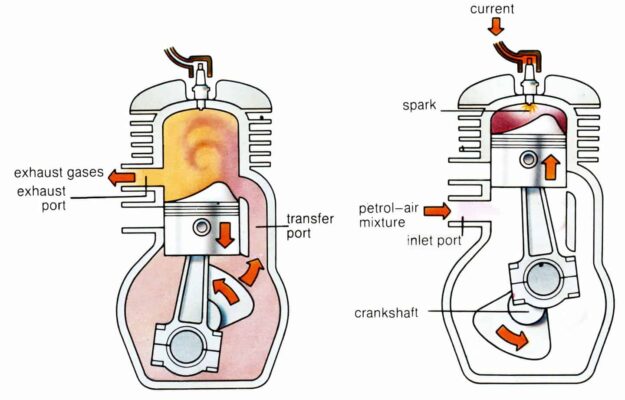 The lubrication system of an engine is used to provide cool, filtered oil to all the moving parts in the engine in order to reduce friction and temperature.
In 2 stroke engines, a mist lubrication system is used. This is because crankcase lubrication cannot be used. The lower part of the crankcase in 2 stroke engines is used to compress the air fuel mixture. Therefore, it is not possible to have lubricating oil in the sump.
Mist lubrication is used in which oil is premixed with the petrol while refuelling in the ratio of approximately 5%. The petrol and oil are administered through the carburettor.

Ans. In 2 stroke engines, combustion takes place with each revolution of the crankshaft, so at any given rpm, it produces double the power of a similarly sized 4 stroke engine.
2 stroke engines also have more instantaneous power delivery, and have a better power-to-weight ratio. They are mostly found in lightweight motorcycles that give the vehicle excellent acceleration characteristics and good fuel efficiency.

Q2. Why are 2 stroke engines banned?

Ans. Due to the high emissions of 2 stroke engines, they do not conform to pollution norms in many countries. 2 stroke engines premix oil in the fuel, and the burning of this oil in the combustion chamber leads to extra fumes. Also, a lot of unburnt fuel exits the exhaust system which leads to more pollution.

Q3. Why are 2 stroke engines not used commonly?

Q5. What cars have 2 stroke engines

Ans. Some notable cars that have used 2-stroke engines in the past are Saab, Suzuki, Subaru, Trabant and Llyod.  Modern cars do not make use of 2 stroke engines. They cause too much pollution, are noisy and are not fuel efficient. They also have a much shorter lifespan than 4-stroke engines.
2-stroke engines in cars also consume too much oil, which turns out to be expensive. These types of engines are now preferred for use in lightweight motorcycles, scooters, mopeds, chainsaws and lawn mowers.
In many countries, 2-stroke engines have been outlawed due to their emissions not being up to standards.

Q6. What are the 4 stroke engine cycle steps?

Q7. How many valves in 4 stroke engines?

Ans. A 4-stroke engine has a minimum of 2 valves. One intake valve and one exhaust valve. The intake valve is used to allow the air fuel mixture to enter the combustion chamber in the cylinder. The exhaust valve allows the burnt gases to exit the combustion chamber and into the exhaust manifold.
Valve movement is controlled by a camshaft. A camshaft is a pear-shaped lobe that opens and closes the valve depending on its position. The camshaft is rotated by the timing belt which is attached to the crankshaft. Together they work to open and close the valves as needed for the combustion process to work.

Q8. What are the 4 stroke engine components?

Ans. The main components of a 4-stroke engine are:
Piston – moves up and down within the cylinder

Cylinder – where the combustion takes place

Crankshaft – converts the motion of the piston into a rotational force

Carburettor – mixes the air and fuel in the correct ratio

Facts You Didn’t Know About the Indian Automobile Industry