Fuel Injection Vs Carburetor: Which Is the Best? 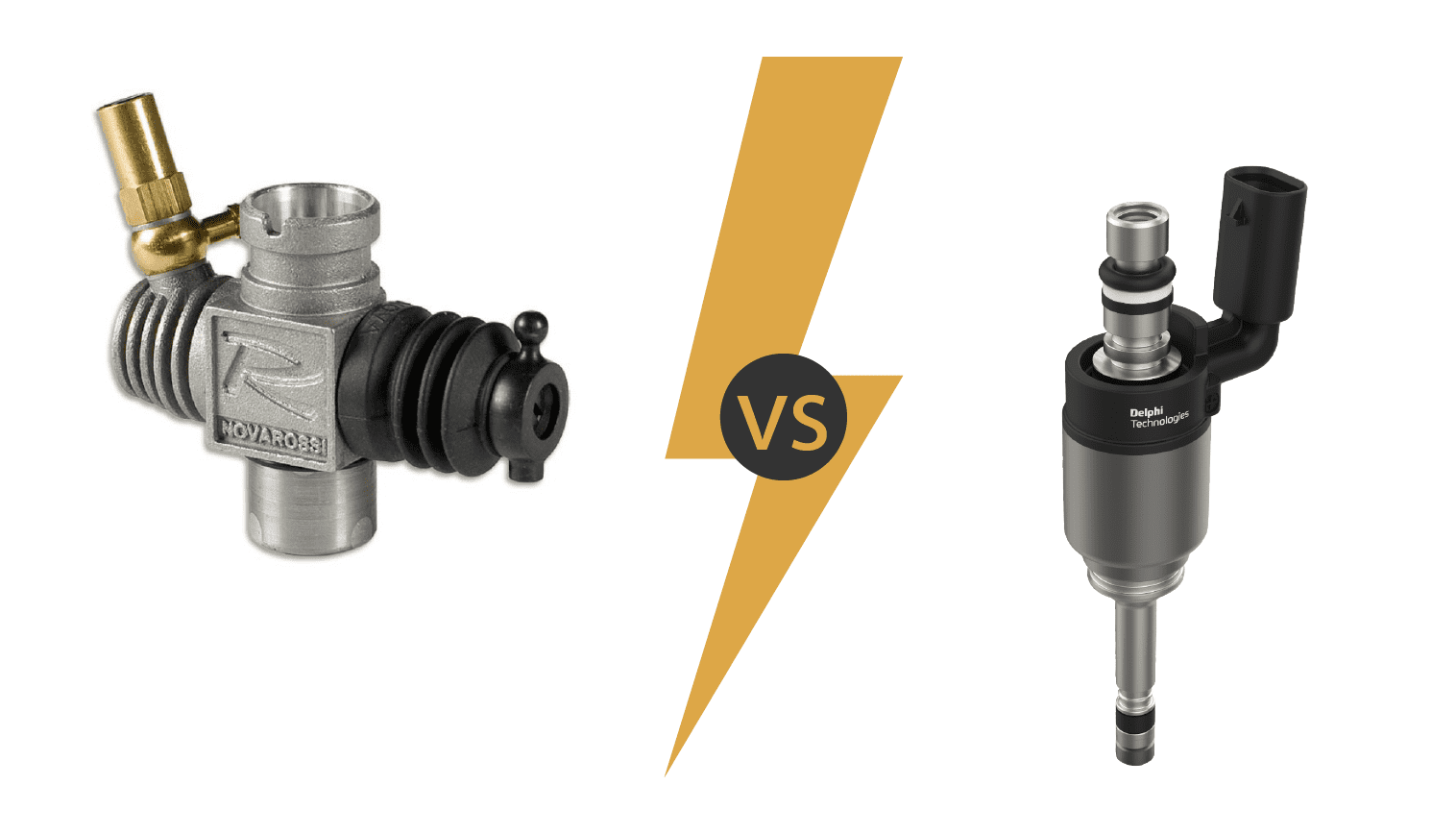 Fuel injection and carburettors both provide the air-fuel mixture to the engine. Carburettors mix the air-fuel in the required ratio, and supply it to the intake manifold. While a fuel injection system sprays fuel directly into the combustion chamber which mixes with air from the intake valve. Due to these different mechanisms, the amount of fuel supply differs with each system. Still, the question remains, which one is better? Fuel injection or carburettor.

With rising pollution levels, emission standards are becoming increasingly strict. Emission norms are forcing automobiles to provide accurate fuelling. Affordable carburettor systems are being replaced with expensive but precise fuel injection systems. However, what are the main differences between fuel injection and carburettors? Let's have a closer look.

With the invention of the internal combustion engine, automobile engineers have constantly endeavoured to find the best way to provide an air fuel mixture to the combustion chamber. A device is required to mix the incoming air with fuel in the right ratio for effective combustion. A carburettor and fuel injector both serve this purpose. So, what is the difference between them?

The primary purpose of the carburettor is to mix fuel and air in the right ratio and feed it to the combustion chamber. When the throttle of the vehicle is opened, it increases the air flow through the carburettor and causes fuel to enter the chamber by the venturi effect. As the air flow is increased, it causes suction of air and the delivery of fuel results in increased acceleration of the vehicle.

Fuel injection system consists of electronic sensors and a fuel pump. The system makes use of the fuel pump to deliver fuel to the combustion chamber. The fuel pump can be found inside the fuel tank of the vehicle. Fuel supply to the combustion chamber is governed by the ECU or Electronic Control Unit. The ECU constantly monitors the fuel supply and makes precise changes based on complex calculations to provide the air fuel mixture in the right ratio.

Several parameters are taken into account by the ECU including the throttle position, engine speed, engine temperature, engine load, etc. The fuel injection nozzle is located directly in the combustion chamber of the cylinder. The ECU controls the precise amount of fuel that is sprayed into the combustion chamber.

Also Read: What is an emission control system? Different types and how they work

What is a fuel pump?

The fuel pump in a fuel injection system draws fuel out of the fuel tank and provides it to the fuel injectors. The pump maybe mechanical or electronic, in which case it can be located next to or even inside the fuel tank.

A mechanical fuel pump is driven by a camshaft that rotates under the power of the engine’s crankshaft. A suction force is provided by the diaphragm in the pump which pulls fuel from the tank to the fuel injectors. It contains check valves that prevent the fuel from draining back into the tank.

An electric pump does not use a camshaft, instead it uses a solenoid (electromagnetic switch) to provide fuel pressure. The pressure provided by the electronic pump is quite high as compared to a mechanical fuel pump. The fuel delivery and parameters like pressure can be more closely monitored by the ECU.

Electronic fuel pumps are more reliable than mechanical fuel pumps. They provide an improved fuel delivery system. These types of pumps are also safer to use and provide a higher flow rate which is required by the fuel injectors.

In a diesel engine, the fuel injectors atomize fuel at a very high pressure. The throttle governs the amount of diesel being atomized in the combustion chamber. Depressing the throttle will increase the amount of fuel being sprayed, resulting in increased acceleration. Unlike a petrol engine, the diesel engine does not make use of a spark plug to ignite the air-fuel mixture. The air-fuel mixture is ignited when the pressure increases during the compression stroke of the diesel engine. The temperature also rises with the pressure during this stroke.

The next type of pump is known as the distributor type pump. It requires a smaller space and is designed for applications where space is limited. It uses a single plunger for all the injectors. The plunger presses the fuel in the fuel chamber to increase its pressure. Even with a smaller design, this kind of pump does not produce high pressure, therefore it is not used in high-capacity diesel engines.

The last kind of pump is known as a continuous pump. It is the kind that is most widely used today and is used for the common direct injection systems. This pump is the smallest size of all the pumps discussed here. The pressure generated from this pump is very high. This pump works like a water pump that uses a turbine. The pump holds the fuel pressure at the required limit.

Carburettors mix a definite ratio of air and fuel for all driving conditions. There are no dynamic ratio adjustments in the case of a carburettor. In fuel injection systems, the ECU is constantly making changes to the air-fuel mixture ratio based on information received from sensors. As a result, fuel economy and management are much better in a fuel injection system. Fuel efficiency is much higher in a fuel injected motorcycle or car. Working of a carburettor.

In a carburettor, the fuel delivery is regulated by the velocity of air passing over the venturi of the throttle. As the throttle is opened, the velocity of air increases and as a result more fuel is delivered for the air fuel mixture that enters the combustion chamber. The part which restricts the fuel is known as the venturi. The fuel is drawn into the combustion chamber by means of the vacuum venturi effect.

There are advantages to the carburettor system as well. Carburettors are not expensive and repairs on them can easily be carried out. The vehicle user can tune the carburettor for more power or more fuel economy. They are made from lightweight materials and are generally long lasting and reliable. They are located separately from the engine hence they can be removed or serviced without impacting the engine.

Some of the disadvantages of the carburettor system are as follows. They are not as fuel efficient as fuel injection systems. As the throttle is opened for increased acceleration, there is a certain amount of lag therefore delaying the throttle response. Carburettors are prone to general wear and tear which requires the components to be replaced. They cannot provide dynamic air-fuel mixture ratios and have to be tuned beforehand for certain driving applications that require more power or greater fuel efficiency. There is a possibility of dirt and dust entering the carburettor resulting in blockages in the carburettor chambers. Also, certain components are quite delicate and are prone to damage.

The working principle of a carburettor consists of pressure drops through the throttle venturi and uses Bernoulli’s principle that states liquids always move from a high-pressure area to a low-pressure area. As air flows through the venturi, the area becomes smaller and the air accelerates to the other side of the venturi. Main jet and pilot jet are two tubes that run from the float chamber (that is filled with fuel) to the air chamber. The pressure drop in the venturi causes fuel to be sucked from its high-pressure area through the jet and it sprays into the air chamber.

Carburettors also have a choke for when the engine is started cold. The air fuel mixture has to be richer to allow the engine to keep running in this condition. When the choke is enabled, it reduces the amount of incoming air and the suction created by the pressure drop allows for a rich air-fuel mixture to be supplied to the engine. There are different types of carburettors depending on the direction in which the mixture is supplied. Up-draft carburettors, horizontal type carburettors and down-draft carburettors.

Carburettors are used only in petrol engines where spark ignition happens. Diesel engines make use of the fuel injection system and require a fuel pump and fuel injectors.

The only parameter where a carburettor proves better than fuel injection is that carburettors are simple to clean and rebuild. A fuel injection system needs the intervention of a technician because they are more complex and use sensitive electronic sensors and components.