List of Hand Tools- Be the Mechanic of Your Vehicle Yourself 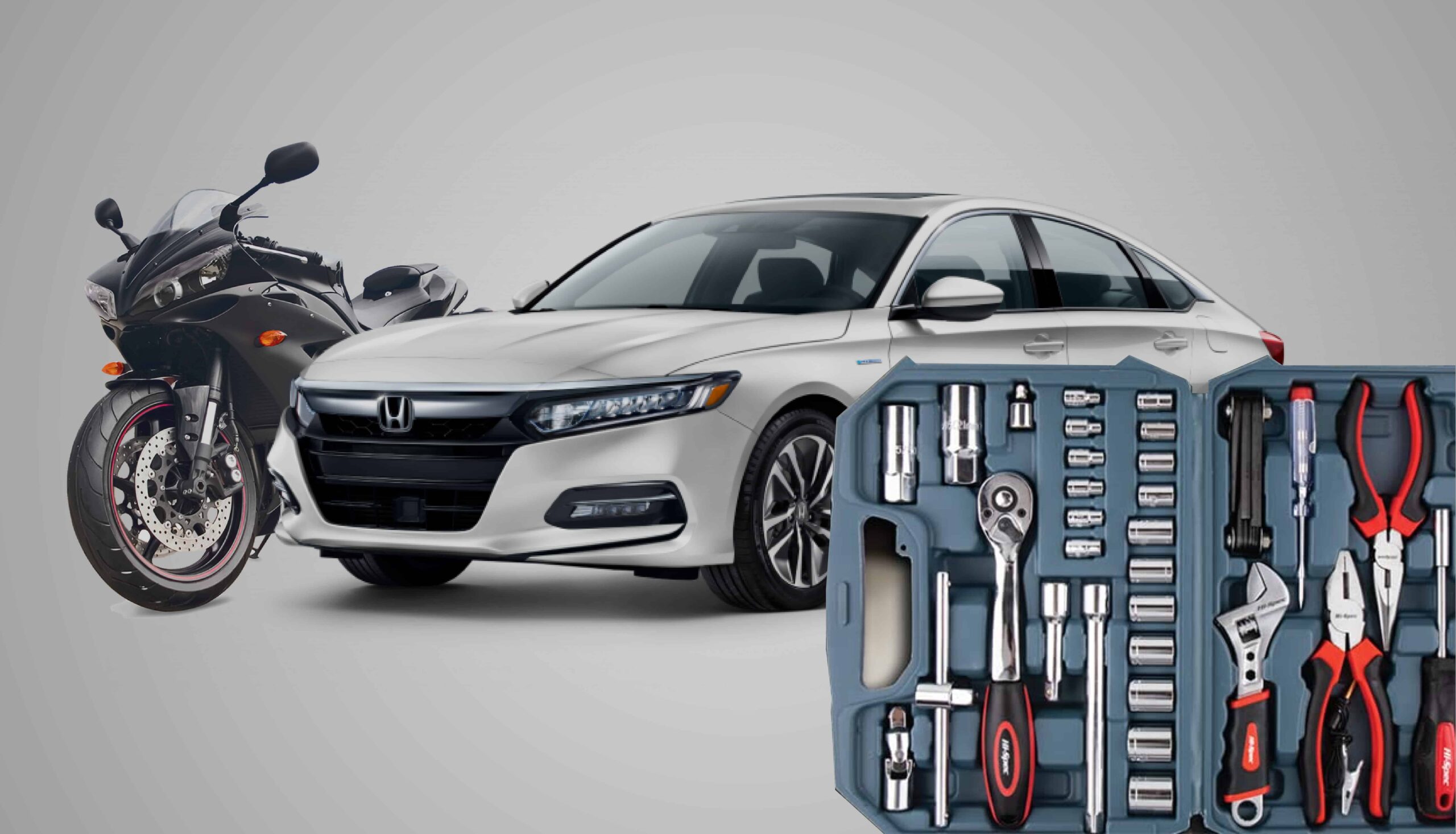 You can’t and shouldn’t go to a mechanic for every small piece of work which can be done by yourself. This will lessen many hassles like saving your petrol and waiting in the queue for the mechanic to look into your problem. Added to this you need to pay an attending fee of the mechanic no matter how small your problem is.

So, today I am here to hand you a list of hand tools which will be beneficial to become a mechanic yourself for your car and bike. Let’s jump in

We will see various hand tools along with their names, as if you wanna buy these tools then you must know their names. Also, whenever needed, you will be guided with pictures.

A screwdriver typically looks like this which has a handle where we hold the tool and a metal head which does the job. Screwdrivers are of various kinds. Let’s take a quick look.

This is probably the most basic screwdriver. A flat head or slotted screwdriver has one blade like structure which we discussed in the previous type. The con with this type is that it slips out from the screw very easily so, a philip-head screw is used instead.

This is a specialty screwdriver which works on screws with this kind of matching screws with a star design. This type of screws are unusual and are used for security purposes as chances are that a thief will not commonly have a star screwdriver.

Wrenches are the most sought after tool after screwdrivers. For removing a spark plug to removing the wheel, a wrench has many uses. It provides torque to rotate a bolt. For loosening a bolt, a wrench is better than a plier as wrenches grasp more surface area of the bolt and hence will loosen the bolt with lesser effort. Also, a wrench doesn’t slip as much as a plier.

There are three main types of wrenches in the market:

Then we have automatic wrenches which are electronically operated and are powerful. We don’t need to apply pressure with these and the job is automatic. These also can apply very good pressure so, it can do a better job than our bare hands. Plug in the needed shape wrench and unbolt the bolts.

Lastly, an adjustable wrench is also available but it is a bit hard to use as you need to adjust the diameter according to the bolt and also the setting changes automatically while in use which is inconvenient. So, it is better to avoid it. Also, it is quite costlier than the other wrenches.

This is what a typical hammer looks like. A hammer is used to insert some nails or give force to any object. This falls under the category of ancient tools which men used. Earlier it was used for hunting and breaking rocks.

There are various kinds of hammer for different purposes but for vehicles we should be good with a hammer having one nail-hitting side and one nail-removing side. We may need a hammer when fitting wheels or removing the tyre etc. It is a handy tool to keep in your garage.

Ball Peen Hammers - These are hammers which have a broader side and a small surface area side. You can keep this also instead of the previous mentioned kind.

This is what a pliers look like.  This is a wonderful thing which almost every individual has used once in their lifetime. Two metal pieces creating a curve are joined to act as a lever to make a plier. The two pieces are joined at a fulcrum point which multiplies the pressure you put.

Pliers are used for cutting wires and tightening different types of bolts. It can also be used to pull out stuck screws and wires.

This is what allen keys look like. They are used to loosen nuts on scooty guards etc. These screwdrivers may also be needed to remove body panels etc.

Well, this job can be done using wrenches too but this is a different tool so is worth mentioning. Spanners cover the complete nut into its pipe type of construction and then we rotate it to loosen a nut.

This is a picture of a spanner.

A spanner has working mechanism of a box wrench i.e., it clutches a bolt from a 360 degree angle.

If you are into repairing punctures by opening the tyre  then this is a must have as you cannot open a tyre without this lever. This lever enters a bit inside the tyre from the side and when you apply force, the tyre comes out from the wheel. Below is a picture of this tool

When we are talking about punctures then lifting jack is a must if you repair tyres at home. Lifting jacks lift your car so that you can remove the wheel and repair the puncture. A lifting jack generally lifts the car when you apply pressure on its pedal. Another mechanism is rotating a lever to lift up the car. To lower it again we need to pedal accordingly.

After repairing a puncture, you definitely need to refill your tyre again. An air compressor will fill your tyre to your set pressure. The air pressure you need to fill varies according to the tyre size and can range from 25 to higher pressures. PSI is the unit used for air pressures. These can be electronic or foot pumps which are manual ones.

A utility knife is really useful to cut connections and wires to expose the wires. You may also need this to cut various covers which guard the wires. So, keep this handy tool in your toolbox. Not to forget, it can be used to chop off the extra tyre puncture plug when it is in excess length and peeking from the tyre.

This is a lighting instrument which is powerful to light up the hood and engine bay or under your car. This is especially useful if your garage is dark and doesn’t allow sufficient lights. Even if you have sufficient lights, still you won’t be able to look into the engine hood. So, this tool is really helpful.

A measuring tape is not an inevitable tool but is good to have. You can measure the length wire you need in case you are changing wires in the horn or indicators. It can also be used to measure the diameter of the rim of the wheels.

Tapes come in many measurement sizes.Normally, a 1m tape should be just fine for use in cars. Nearly all tapes in the market come with a retractable mechanism. There is a spring which pulls back the tape once you release a button. These tapes are easy to store as they are compact and you don’t need to fold it to store after use.

A funnel is very useful to drain and empty the fuel tank. This will come in handy if you are working with the fuel tank. You can also fill the tank using this funnel.

A vacuum pump is useful for draining brake fluids and refilling fresh oil in the brakes. Also, it is useful to find ac leaks and other leaks by yourself

Here was a list of every possible tool which you may need for small or big repairs to your car. For any part replacement, these tools will surely be necessary so, buy these and enjoy repairing your vehicle on your own. Surf our site and get awesome deals.

Automatic Transmission Car in India: The Effort of Shifting Gears Are Gone Now