14 Troubleshooting Techniques for a Bad Battery Vs a Bad Alternator 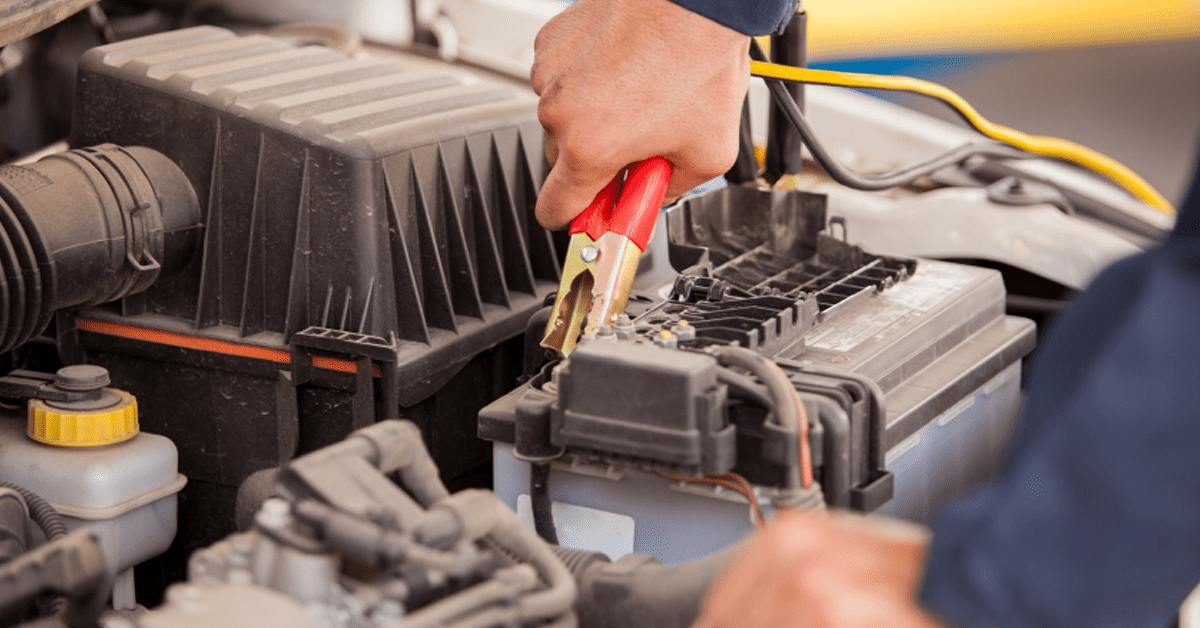 If you have problems starting your car or if the car stops frequently, there could be an electrical issue with the car, i.e., either it is the alternator or the battery that is causing the problem.
In the process of starting the car, when the ignition is turned on, the battery sends a high voltage to the starter motor, which is used to turn over the engine and begin the internal combustion cycle by firing the spark plugs. 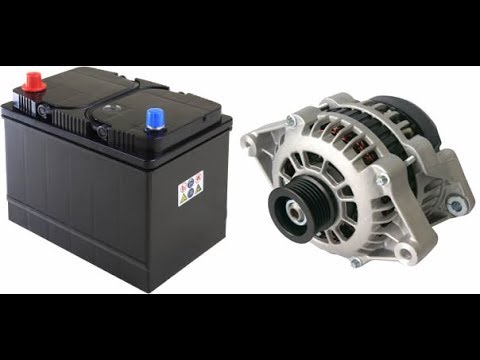 Once the car engine is up and running, the battery is not used, instead the alternator powers up and starts to charge the battery while providing electricity to various components in the car.
When there is a starting failure or a stall during running the car, it could be either an alternator or bad battery problem.

Narrowing Down the Problem

Which component is giving you the problem? Is it the battery or the alternator? We will go through the symptoms of a bad battery and symptoms of a faulty alternator to narrow down the problem.
This will give you a better picture of the starting component (battery) and the charging device (alternator) in the car.
Let’s have a look at the signs of a bad battery because there are more chances of the battery receiving a fault.

Symptoms of a Bad Battery 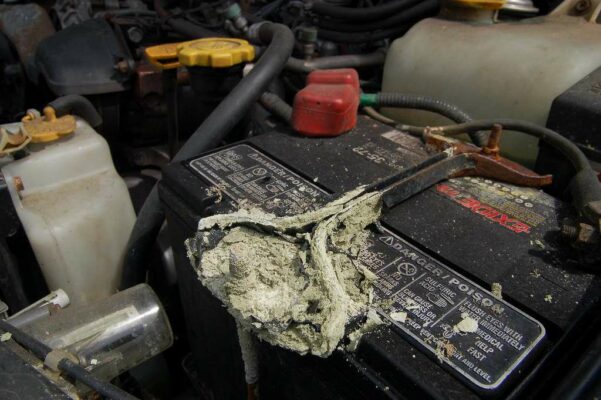 A faulty battery will usually give you problems when you try to start the car. Jumper cables can work here, if the cause is a battery on low charge.
The jumper cables hook up to the battery of a car that is idling, and the electric charge is used to fire up the dead battery.
But before you do this, check out the signs of a bad battery. 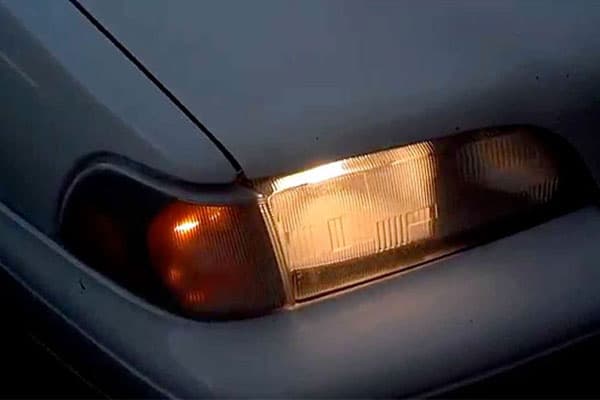 When the engine is not running, the battery powers all the electrical components in the car. Turn on the ignition and check if the dashboard lights turn on.
If the lights are dim or don’t turn on at all, you know you have a weak battery on your hands before cranking up the engine.
Next, turn on the headlights of the car. They have to be bright otherwise you know there is a weak battery under the hood. Even headlights that are dim are a problem.
Keep in mind that a weak battery will cause the headlights and dashboard lights to be dim.
On the other hand, a dead battery will not turn on any of these lights.

Lack of Cranking of the Engine, or Slow Cranking

If your engine won’t turn over, is not cranking at all or is cranking over very slowly, then get a set of jumper cables and connect it to the car that is idling its engine. Connect the jumper cables to the idling car’s battery and attempt to start your car.
If your car starts without a problem, but gives problems later while starting, you know it is a weak battery problem.
If your car starts but as you try to move, it stalls, then you have a problem with the alternator.
When using the jumper cables, ensure that you connect them properly to avoid getting a short circuit and causing more electrical problems for your car.

The Battery is Too Old

Batteries usually have a service life of about 3 to 5 years. As the battery gets older, it loses its ability to hold an electrical charge.
Older batteries also sometimes leak and the terminals get corroded as mentioned above. This prevents them from charging properly.
The life of a battery is determined on how long it can hold a charge and how well it can be recharged.
There are different batteries types, and the lifespan is generally determined by the chemical composition of its cells.

There is an Odd Smell

Lead acid batteries contain sulphuric acid, a leaking battery will emit sulphuric acid gases that will have an almost rotten egg smell.
If your car battery is leaking, there will be visual indicators of acid leaking and gases leaking giving off an odd smell.
In this case the battery needs to be replaced as soon as possible, because it won’t be able to hold charge and is incapable of recharging as well.

In extreme temperatures, the battery will tend to swell as the internal battery acids expand in their cells and cause warping of the plastic housing.
If you notice your battery is swollen, warped, bloated or distorted, it needs replacing right away.
With a bad battery, you will have starting problems as insufficient voltage is provided to the starter motor. Also, the battery will not get charged as it should which will cause problems the next time you try to fire up the engine.
In all the cases mentioned above, you will have to either replace the battery, or get it refurbished for further use. 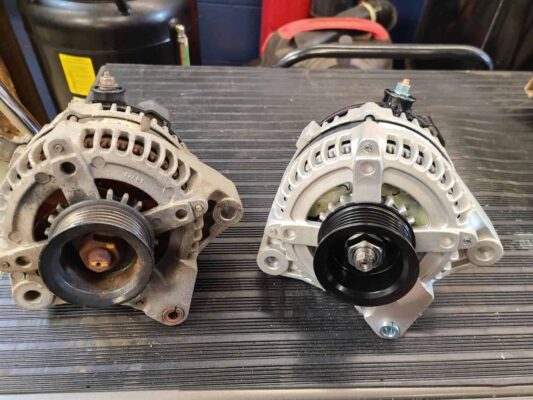 Since we have gone over the symptoms of a bad battery, you can rule them out in case you don’t experience any of the said problems.
Next you must focus on the alternator, as this component may be giving you problems. Let’s look into the signs of a bad alternator. If your battery seems fine, the alternator may be the culprit.

Here Are Some Troubleshooting Issues

The Engine Has Trouble Cranking and the Car Stalls

When the alternator is failing, it will have trouble charging up the battery when the car is running. With a battery that is not fully charged, the car will not crank up on starting the ignition cycle.
This means you will have to perform a jump start to get the vehicle running. If the jump start is successful, and the car immediately stalls, then the problem is most likely with the alternator.
If the car frequently stalls while running, it could be a problem with the alternator and its associated components like the rectifier and charging coils.
If the car fails to crank over, but the headlights and dashboard lights are fine, this means the battery is ok and the alternator may be fine too. Here the problem is clearly the starter motor.

If the interior cabin lights, dashboard lights and headlights get dimmer as you are driving, it is a case of the alternator providing insufficient power to the electrical systems.

Battery That is Always Low on Charge or Dead

You might think that a weak or dead battery is a battery related issue, but it can be in fact caused by a faulty alternator.
A faulty alternator will not charge up the battery, and with subsequent start-ups, the battery goes weak and can even go dead.
As time goes by, you will end up with a weak battery that refuses to start the car.

If the alternator is not working properly, you will have all sorts of problems with your electrical systems on board the car.
Due to inconsistent power from the alternator, the stereo may start to malfunction, power windows will roll up and down very slowly, speedometers may start to behave weirdly, all because of a faulty alternator.
There are electronic control units in modern vehicles which will prioritise voltage to important components in the car. For example, the interior lights may go dim before a headlight fails due to a matter of safety.

Squealing Noises From Under the Hood

A squealing noise from the engine is not a good sign.
If the sounds get louder when you switch on an electrical component like the air conditioner or the stereo, then this means that you could be having alternator problems.
The sounds of squealing could be caused by a misaligned alternator belt that is squeaking against the pulley, and not allowing the alternator to spin fast enough to produce the right amount of electric voltage.
If the sounds get louder as you rev the engine, it is a good idea to check the alternator for any problems.

Burning Rubber Smell From Under the Hood

The alternator belt is always under tension because it has to spin it to produce the right amount of voltage. Due to friction, it may wear down and cause a burning smell from under the hood.
An alternator that is faulty may also have burnt wires that are damaged due to overwork. This may also emit a burning smell. Wires that have lost their insulation due to heat may end up creating electrical resistance and heat up the alternator as it tries to conduct electricity through them.
This is a sure sign that you must get your alternator checked.

If you have the battery symbol flashing on your dashboard, or even a check engine light, then you may have a problem with the alternator.
The lights may start to show up when you turn on an electrical system in the car. This means that the alternator is having trouble providing the right amount of power to the electrical components.

Can I Drive With a Bad Alternator?

It is not advisable to drive your car with a faulty alternator. It could cause some of the electrical components in your car to malfunction. Also, while the car runs, the battery will be depleted of charge completely, which will prevent you from starting up the car next time you need to.
This would mean you will have to jump start the car, and without access to another car, you could be left stranded in the middle of nowhere.
It is always better to replace or repair the alternator if you are having problems with it.

Electrical problems in a car are never a straightforward issue. There will be a lot of trouble shooting to identify the cause of the problem, i.e., is it a battery or an alternator related issue.
A dead or weak battery may not be the only issue you have to deal with. Many times, the symptoms of a problematic battery and a faulty alternator overlap, which makes identifying the cause even more tricky.
A bad battery will not damage the alternator, but a faulty alternator may cause some damage to the battery. The car battery cannot constantly deliver electrical power to the components of a car. The alternator has to recharge it while the car is running.
A faulty alternator may cause the car to stall at any time, and because it is unable to charge the battery efficiently, the car may not even be able to crank up leaving you stranded.
Finally, there is also a starter motor which is a whole new topic of discussion.
If the driver cannot identify the root cause of the problem, then it is always advisable to seek the services of a certified technician to solve any electrical issue in the car.