Baleno Vs i20: Price, Mileage, Specs, Dimensions and More 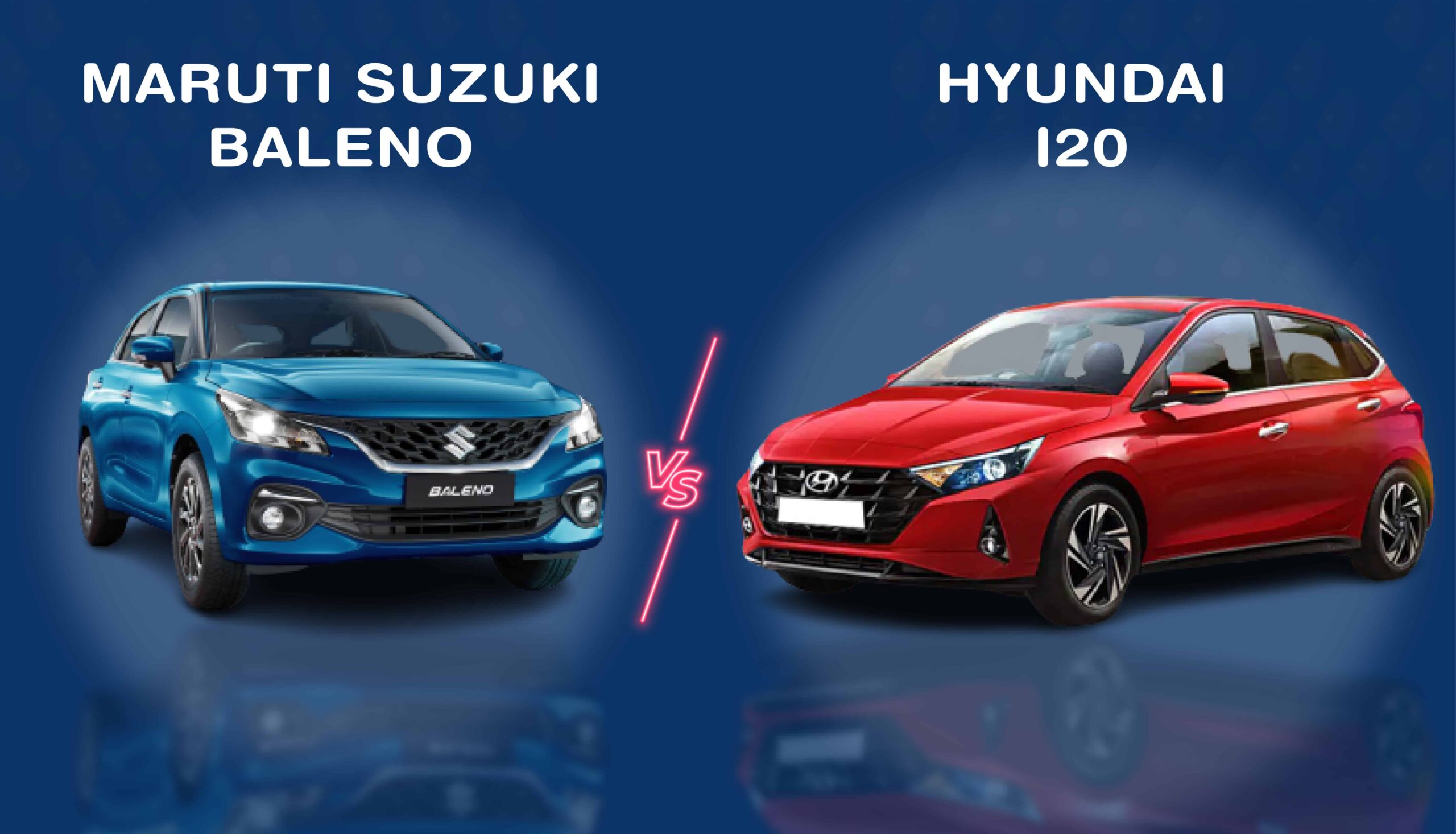 The newly launched Baleno has made a mark with its super aggressive pricing. But a never ending debate has also started amongst the hotly contested premium hatchback segment: Baleno vs i20. Read this article to know more about Baleno vs i20 and how they fare in terms of price, mileage, specs, colours, and safety.

Baleno vs i20: Price Comparison

It can be inferred from the table above:

Baleno’s top model and base model are cheaper than Hyundai i20.

Automatic transmission for Baleno starts at 7.69 lakh while i20 automatic starts at 8.84 lakhs. At the same time, Baleno isn’t available with a turbo engine, nor with an iMT, iVT, or a DCT. Rather it has an AMT.

Baleno vs i20: Mileage Test

This is due to the Balenos highly efficient start stop system and its revered reliable engine technology. Real life mileage figures are as follows.

Please note that the figures provided are real life tests done and can vary due to change in altitude, temperature, slope height, conditions of the road, and other factors.

Baleno in this aspect, still lags quite behind the i20, even after its facelift. This is due to the fact that Maruti decided to keep the Baleno mechanically unchanged. The Baleno is available in 1.2-litre manual petrol, and AMT petrol versions, both making the same power 88 bhp, but the AMT version is slightly slower than its manual counterpart by around a three fourth of a second in the 0-100 kmph sprint. Here we compare the engines available in top variants of both cars.

Baleno vs i20: Dimensions

The Baleno and i20 are almost at par in almost every aspect of dimensions, with height, length, and ground clearance being almost equal. Meanwhile, the breadth of the i20 is 30 mm more than the Baleno. Boot space of the Baleno is marginally 7 litres more than i20.

Baleno vs i20 Miscellaneous - Safety, Space, and colour options

Baleno vs i20 on basis of space - The dimension figures, although reflect that the Baleno is smaller than i20, the i20 is still less spacious than the Baleno. However, even the Baleno is a bit cramped as compared to other subcompact rivals such as Tata Punch [yes, the price bracket is quite similar], Venue and other lower models of subcompact SUVs [except for Sonet which also has poor seating space at the rear].

So if space is your priority, it is advisable to stretch the budget a tiny bit to go for the lower models of subcompact SUVs. Or maybe buy a new car from the new segment created by Tata Punch and Maruti Suzuki Ignis. However if budget is a constraint, then Baleno would be the pick amongst both the hatchbacks.

Baleno vs i20 on basis of safety - Although it is hard to say which one is the safer one amongst the two without their NCAP ratings, considering Maruti has upped their steel strength and included a number of active and passive safety features, it is safe to assume that Baleno is now the safer car. [Another way to check is by closing the doors and checking the thud sound].

Baleno vs i20 fit and finish - The Baleno in this matter is just an inch behind i20, only when we compare similarly priced variants, i.e top model of Baleno [Alpha] with Asta Manual. On comparing i20 with Baleno via the top variants, i20 for sure wins, due to its plush interiors.

The same is the case when we compare the base variants of Baleno and i20. The Balenos interior looks bare bones, with the dashboard looking out of place. I20 however, has managed to keep the overall design in place, even though both variants have almost the same features on board.

Baleno vs i20 colour options -

So this was everything you needed to know about the detailed comparison between Baleno vs i20, with in detail attributes such as Price, Specs, Mileage, specs, performance, safety, specs and our final verdict.

We at Carorbis hope that this article helped you to learn about the differences. If you found this blog enlightening, make sure to check out other interesting articles on the Carorbis Blog and also read Baleno Pros and Cons at the end in this article - 2022 Baleno Variant wise Price, Specs, Mileage & more.